Mary Ann Stone was born in 1789 in Gosport, Hampshire to parents James Stone and Jane Collins. Just days after Mary Ann’s Christening George III, later to be known as Mad King George, his wife Queen Charlotte and their two eldest children, Charlotte the Princess Royal, and the Princesses Augusta and Elizabeth set out to stay with the Kings brother at Lyndhurst. Just prior to that, only two days before Mary Ann’s christening, the Royal Family had visited Portsmouth where Mary Ann was to spend a large portion of her life. The Newspapers were full of the descriptions of the events and how colourful the town had been with flags and flowers to celebrate the occasion.

It is difficult to know what Mary Ann’s life was like at this time. The Country was at war with Napoleon and his troops from 1799 to 1815, there was extreme poverty and just off shore in Gosport was the looming shadow of the HMS Captivity, one of the early Prison Hulks, an ever present reminder of what could happen to those who fell afoul of the law. Possibly also, an image of things to come for the descendants of Mary Ann. 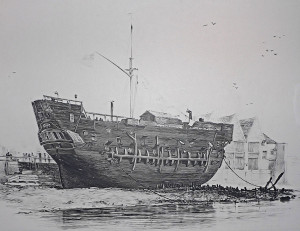 May Ann was probably not from an exceedingly poor family. She was well educated and in later years was able to support herself as a teacher. So she was given an education at some stage and this is likely to have been when she was young.

In 1812, when Mary was 23 years old she married Robert Wood Gransden. Robert was just two years older than Mary and had been born in Kent. He and his family had moved to Southampton in the early 1790’s where his younger sister and brother had been Christened and probably born. Robert was a Colour and Oil man. Originally a colour and oil man sold colours for painters. But later they widened their range of products and sold a variety of household goods such as candles and soaps, starch, matches, firewood, brushes, baskets and brooms, lamps, linseed and other oils, beeswax, vegetable wax, etc. This range could also extend to grocery items such as sauces, pickles and jams, and to chemicals and drugs such as soda, salts, quack pills and poor man’s plaster and a miscellaneous mixture of other commodities including hardware, ironmongery, china, lamp-black, size, ochre, chalk, sand, gunpowder and shot.

Shortly after their marriage Robert and Mary moved to Portsea where their children were born. Between 1813 and 1829 Mary Grandsen had ten or eleven children in just sixteen years, one child Emma, may not be from this Gransden family. As those children grew up Mary was to watch them scatter across the globe. Her eldest son went to sea, her eldest daughter sailed on the second female immigration ship, the Layton, to Australia when the youngest child, Silas, was just four years old. When the younger children Edwin and Silas were old enough they also went to sea and later settled in Australia. Mary’s other children settled in and around Hampshire and Kent where their parents had come from.

There is nothing to indicate that the early years of Robert and Mary’s marriage was not a happy one, but in 1853 Robert placed a notice in the Hampshire Advertiser and Sailsbury Guardian to let people know that he and his wife had separated and that he would no longer be responsible for her debts. As divorce was such a difficult thing at this stage, this notice was essentially an indication that Mary Ann and Robert had separated. This was as close to a divorce as it was possible to get without things becoming very difficult for both parties.

Despite the struggles that a single women at this time faced it appears that Mary Ann managed to support herself. She became a school mistress in a local school and was able to move into her own place at 107 Sir Georges Rd Freemantle, Millbrook Southampton. Millbrook was a suburb of Southampton and in 1861 while Mary Ann was living in the area they were just getting a railway line, only a few short years after the earliest Railway Stations had opened around England.

Teaching was not an easy way to make a living, as can be seen by these rules that a teacher had to follow in the 1850’s and 1860’s.

Mary had seen a lot during her life the advent of the Railway, the Napoleonic Wars, the opening up of Australia to more and more immigrants and the migration of at least four of her children to Australia, the Reigns of three Kings and the start of the Reign of Queen Victoria. Mary herself was a remarkable woman. In a time when very few women had the ability or the power to separate from their husbands, she had moved away from her husband, found work and was able to support herself. Mary had also made sure that each of her children had an education and were able to read and write, as shown by their very educated and literate style of writing many years later. In 1863 Mary Ann Gransden nee Stone died. Her children were not present at her death, instead Sophia Wilcox was the informant on her death certificate. Mary died of General decay, rheumatic gout and diarrhea.

Mary Ann’s children continued their lives showing the same indomitable spirit that their mother had shown when she showed the courage to take her own life in her own hands and go and teach at a school for the final years of her life. 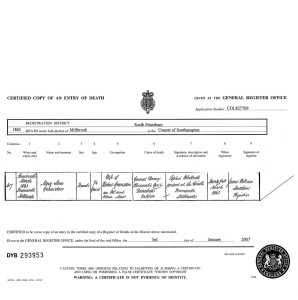