There are many “William Gransden”s. This is the tale of a British one who crossed the world to seek his fortune in the gold fields of New Zealand. This particular William was born in Harwich in Essex, England and baptised in 1831. His father, also a William (I said there were many!) was a seaman and an early appointee to the British Coastguard service, having served in the Navy. William, the father, was born in Kent, probably in or near the naval town of Chatham. William’s mother was Susan Pottle who was born in Essex. William junior had a younger brother John and a sister Susannah but the latter child died in infancy. Around 1836, when William was five years old, the family moved so that the father could take up his first coastguard post in the west of Ireland, then still part of the United Kingdom.

More siblings were born in Ireland and it was the two eldest boys, William and John,  who became seamen like their father. Their records confirm their home was in the west of Ireland. When William first went to sea at the age of 16 he was still growing and had, just like his father, a fair complexion with red hair and hazel eyes.

Shortly after William Gransden (junior) went to sea, in 1849 a William Gransden married an Anne Connor in Ireland. Which William married Anne? Father or son?  William the father is known to have married again in 1850 when he was described as a widower. This wife was Kitty Stewart with whom he had a long life together and a “second” family of more children. So Susan Pottle, his first wife seems to have died. There is no trace of another Gransden family in Ireland. So either William senior married Anne Connor only for her to die within a year and for William senior to marry for a third time, or Anne married William junior, then 18. I favour the latter conclusion.

The rest of this story relates to William junior. An Australian “arrival record” refers to a William Gransden, born around 1834 arriving at Melbourne on 22nd Jan 1861 on board the ship Morning Light, which had sailed from Liverpool. William’s nationality was given as “Irish”. This would fit with being born in England around 1831 and being brought up from an early age in Ireland. The next record of interest shows a William Gransden (said to have been born around 1829) arriving in Melbourne on the ship Hero, having sailed from Port Chalmers in the South Island of New Zealand. So he was sailing the waters of Australia and New Zealand.  Over the subsequent years press reports and other documents describe William Gransden in New Zealand. A miner, without a wife, he became a respected member of the community in Greymouth on the West Coast of the South Island.  He was almost certainly after gold. This was the era of the gold rush. 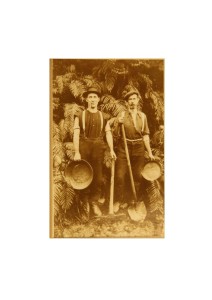 The Gold Rush on the West Coast of New Zealand dates from 1864 to 1867. In 1865–66 gold was discovered at Okarito, Bruce Bay around Charleston and along the Grey River. Miners arrived from the Central Otago Gold Rush, and from Victoria, Australia where the Victorian gold rush had nearly finished. By the end of 1864 there were some 1,800 prospectors on the West Coast, many in the Hokitika area, just south of Greymouth. Up to a half of the miners were Irish. Hokitika was in 1866 the most populous settlement in New Zealand with a population of more than 25,000 served by more than 100 pubs. In 1867 the rush began to decline, though gold mining continued on the West Coast for some years.

[For an excellent flavour of life in the Gold Rush around Hokitika at this time you could read Eleanor Catton’s novel The Luminaries, which won the Man Booker Prize in 2013.]

Mining records held by Archives New Zealand in the Christchurch Regional Office, show William’s interest in mining works.  He is recorded in the Mining Register for the Arnold district in 1880. Given his eventual impoverished final days it is unlikely he became wealthy through mining. Although he was a respected Freemason the records of the Grey Lodge shed no more light on William’s life. 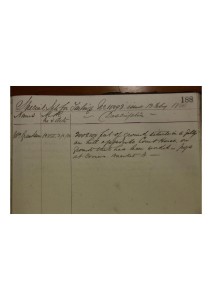 There is some further published evidence of his travels, shown in the table:

In New Zealand, William seems to have worked hard and was respected. He served on coroners’ juries in several inquests. Civic records indicate where he lived and some of his activities around Greymouth in New Zealand.  Electoral Rolls from 1880 to 1907 record his residence in Maori Gully, Arnold and Greymouth as a miner. He is listed variously as Wm R Gransden, William Roland Gransden.

His second given name has now emerged – Roland or Rowland.  Roland as a given name is a surprise. There were no other Rolands among the Gransdens that I could find. It remained a mystery until, that is, I discovered that a witness to the marriage of his parents, William and Susan, was one Hannah Rowland. Strong evidence for William Rowland being William Gransden’s first son.

These records of letters, voyages and civic life in New Zealand begin when William was around 40 years of age. The first record of his arrival in Melbourne was ten years earlier. What happened during those ten years?  It was not uncommon for sailors at that time to jump ship and join the Australian and New Zealand gold rushes. Perhaps that is what William did, taking time to become established in Greymouth. One cannot help but wonder who sent those unclaimed letters?   Why did William travel to Britain at the age of 57 and return to New Zealand after some nine months in 1888-9? Is there something significant about the date?  His parents were both dead by then. He had a sister Emma who had married and had a family of her own, so William certainly had nieces and nephews. Is it a coincidence that he was known familiarly as “Uncle” by his friends in Greymouth – as we will see later?

William was still recorded as a “miner” up to the age of 76. However, he seems to have become increasingly frail, receiving help from friends. His benefactor towards the end of his life, Mr Claughsey, was from Tipperary as was his wife. So too was Mr J Byrne. (He was Chairman of the Grey Education Board, born in 1810 in Tipperary, Ireland, where he went to school. He afterwards went to Australia, and landed in Melbourne, in 1859. After some experiences on the goldfields, he removed to New Zealand, and settled on the West Coast in 1866. Mr Byrne was the proprietor of a hotel at Paroa. He was elected to the Grey Education Board in 1887).  Were they all Irish friends?  There is no record of William marrying. The only other Gransdens I can find in New Zealand are very recent migrants.

Gold mining was a major source of employment in early New Zealand. After mining, many moved into farming or other professions. Those who were struck by gold fever stayed, living out their lives in shacks until they were too old or infirm to work a shovel and gold pan. These old prospectors were known as hatters. Their passing marked the end of a pioneering era, when men could be footloose drifters who entrusted their fate to gold in the gravel.

William (the hatter?) declined in his ability to cope and had to be admitted to hospital in Hokitika just south of Greymouth. The Superintendent of the Hospital, John Downey, stated that William was been admitted from Greymouth on 6th September 1910. He reported “He was then 78 years of age and was feeble and suffering from complete loss of memory. For the last 6 months he has been gradually failing and of late was not able to help himself in any way.”  William was reported to have received good medical care.

The details of William’s final days are sad. His medical records still exist. Some entries are particularly poignant bearing in mind his age and huge distance from his only family. For example:

“Says his father is at present in charge of works at Greymouth wharf, also that their family are going to live at Grey” [words of  Dr McBrearly]

“He wanders away from the hospital, saying he is going to join his family in town, and he has no relatives in the place.” [words of Dr Moice]

William died on February 26th 1912. The subsequent inquest record refers to William Ronald Gransden. He was seen by the medical officer at 11.30 and noted to be in a “moribund condition from old age and heart failure.” Dr Leichelman recorded that he “ . . did what he could for him but did not expect him to live long. He died that evening around 6.20. Cause of death: Senile decay and cardiac failure”.

The Grey River Argus, on 27th February 1912 had several notices regarding William’s death.

It is with regret that we announce the death of Mr William Gransden which took place yesterday. Deceased was a sterling fellow and was well and favourably known throughout the district. He was a prominent member of the Masonic Lodge and was familiarly known to the brethern as “Uncle”. He was a miner by occupation, but for many years resided in Greymouth as the guest of Mr William Claughesy of the Empire Hotel, and until his recent illness Mr J Byrne. The funeral will take place this afternoon at 2.30 o’clock, and the members of the Masonic Lodge are requested to meet at the lodge room at 2 o’clock.

The Brethern (sic) of the above Lodge are requested to attend an emergency Meeting in the Masonic Hall, Tainui Street TO-DAY (Tuesday) at 2pm, for the purpose of attending the funeral of their late brother WILLIAM GRANSDEN. Mourning regalia. Visiting brethren (sic) invited.    BY ORDER. 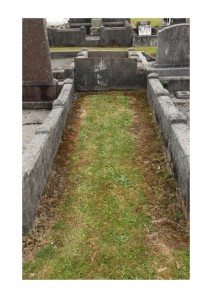 William Rowland Gransden died, intestate, in 1912. Probate documents refer to William Ronald (sic) Gransden, late of Hokitika in the District of Westland (New Zealand) a miner. He left three pence in cash, seven shillings and six pence worth of effects, 15 shillings worth of jewellery and £20 in cash with the Public Trustee.

In summary, William Rowland Gransden was born in Harwich, Essex, brought up in the wild west coast of Ireland. He had red hair and hazel eyes. First a sailor he then became a miner in the gold fields on the wild west coast of New Zealand. There he was a respected member of the community.  After physical and mental decline he died and was buried in Greymouth.

William Rowland was a son of my great-great-grandfather. All three of us are named William Gransden. Much is unknown of his life. Did he marry Anne and did they have any children?  Why did he return briefly to Britain? Did William ever meet Silas Gransden whose story also appears on this web site?

William left little. There was no will. His possessions were meagre. He appeared to have neither wife nor children.  He was buried in the Karoro Cemetery in Greymouth. At that place today there remains little apart from the grave site. It is likely that there once was a wooden cross that has long since perished in the elements. All that is left is the gap between two stone monuments.

[Acknowledgement: I am extremely grateful for the expert help of the staff in the Christchurch Regional Office, Archives New Zealand, for their help in obtaining documents.]