This account continues with Jane, the surviving daughter of John Robert Gransden, Master in the British navy. She is remarkable for living more than one hundred years.

Jane was the first daughter of John Robert Gransden and Jane Ann Bingley. She was born in Kent, England (probably near West Malling) on 13th December 1816. Her only sibling was Frances Jordain Gransden born two year later but who died at the age of 17. Her father died in 1830 when Jane was only 14 and in 1841 the England census shows that Jane was living at High Street Camberwell, in what was then called the hamlet of Peckham (now very much within Greater London). Her mother was living on her widow’s pension.

In 1844 Jane married Samuel Cocking, a carpenter. They started their family in England with the birth of their son Samuel (in 1845) followed by two daughters – Jane (born in 1847) and Frances Gransden Cocking (born in 1850).  In 1848 the young family migrated in a six month voyage to Adelaide, South Australia, no doubt to escape the severe economic conditions of that decade (as did so many including other Gransdens).  By 1850 Samuel senior was registered living in Weymouth Street. Samuel and Jane Cocking would eventually have eight children. Their fourth and fifth children were born in Adelaide – Mary Ann in 1852 and Horace in 1854.

Samuel’s next job was as an architect in the Public Works Department of Victoria. In 1856 the family were living in South Melbourne. Melbourne had expanded greatly following the gold rush. Their home for many years was in St John’s Parade, Kew. It was there that Samuel senior died, in 1888.

Given the great age that Jane Cocking achieved it is no surprise that she outlived several of her children.  There are records of eight children born to Samuel and Jane Cocking, five already mentioned and three more born in Melbourne – Bingley, Thyra and Clara. Of these the first two were born in 1860 and 1863 when Jane was aged 44 and 47 respectively. There is no date of birth recorded for Clara.

Among the children it is Samuel who had the most remarkable and successful career –  in Japan. I am sincerely grateful to Dr Luke Gartlan for much of the biographical information concerning Samuel. This first son of Jane and Samuel Sr established the Cocking Trading Company as a trader arriving in Yokohama in 1869 shortly after Japan began opening up to foreign business. In his twenties the enterprising open-minded Samuel traveled to London where he purchased a clipper sailing vessel with his business partner, Theophilus Singleton. So different from the fortunes of many Gransdens who were paying passengers or crew on sailing ships, rather than their owners!  In 1872 he married a Japanese woman, Miyata Riki. He was deeply immersed in Japanese society, culture and business. His company traded in art, antiques and specialty plants (particularly peppermint and its oil), but it became very successful through the importation of carbolic acid in 1877 which helped create his first fortune. Carbolic acid was used as a disinfectant particularly against cholera. (In 1865 the Scottish surgeon Lord Lister had transformed the safety of surgery through the use of carbolic acid.) In one epidemic Samuel Cocking distributed his carbolic acid free of charge.

In his wife’s name he bought land in the hills of Enoshima – an Island near Yokohama in Japan where he built a villa and botanical gardens including a huge greenhouse for tropical plants. He established a power plant for his own concerns and this later developed into the Yokohama Cooperative Light Company. He is believed to have introduced soap, bicycles and the electric lightbulb to Japan. His increasing fortune allowed hm time to pursue his interests in photography and art collecting. He did much to help develop the field of photography – not only the processes of photography but also the creation of a photographic community, meeting and sharing ideas. His collection of Japanese art objects was reputed to be one of the finest in the world. 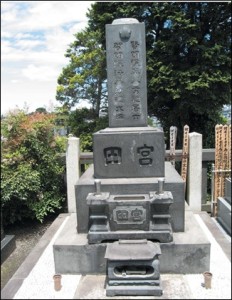 The garden he established survives to this day and is managed by the city as the Samuel Cocking Garden. His sister joined Samuel and his wife but tragically she became a victim of typhoid fever and died on 16th August 1876 at the age of 26. Samuel was forced to reduce his business after the failure of a British bank with which he worked. He died in 1914 following a heart attack.  His funeral took place in March 1914 in a Buddhist Temple near Yokohama. His cremated remains were buried in Aizawa Cemetery, Yokohama. This was most unusual for a foreigner and indicates his adoption of Buddhism and Japanese culture.  His wife had a large family headstone erected and engraved with his kaimyó- a posthumous Buddhist name. The photograph shows the gravestone of Samuel and his wife Miyata Riki.

Two of Jane and Samuel’s children died at a young age, Mary Ann and Horace both at the age of seven. Nothing is known about Clara except that she died in 1889. The remaining siblings were Bingley who managed for thirty years Callubri Station, Bogon River in New South Wales and Thyra who was a teacher in at private school in Camberwell. (Bingley was the maiden name of their grandmother). It appears neither married. In later years they shared the same address 65 Prospect Hill Road in Camberwell.  The brother survived until 1928 and Thyra till 1932.

Returning to the mother of this family, Jane Gransden Cocking, The Sydney Morning Herald marked her centenary with a short article in 1916. It concluded thus:

“Notwithstanding her great age Mrs Cocking is physically and mentally active, and converses with marvellous accuracy regarding her many experiences. She never wore spectacles, and until two years ago her vision was so little impaired that she could thread a needle.”

Surely it would have been wonderful to hear those “many experiences” from Jane herself?  The beauty and tranquility of those gardens in Enoshima are remembered in the name she gave to her her home in Melbourne: “Enoshima” on Prospect Hill Road, Camberwell in Melbourne, from which her funeral left on 20th February 1918. 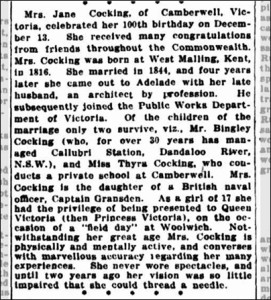 In her will Jane left her estate to her daughter Thyra, the school teacher.  Her son Bingley was bequeathed her diamond ring with the word “sincerity” engraved on it, her family Bible and a life sized portrait of her late husband.

So three remarkable people, representing three generations of the Gransden family connect a robbery in South London to a Buddhist grave in Japan.