In the most recent subject I am doing for the Diploma of Family History at UTAS the focus is on Place, Image, Object. The idea is to look at places, images and objects to provide context for family history.

One of the assessment pieces in this unit is an annotated map. The map has to have both a subjective and objective element to it. I decided to do a map of Sydney based on a map from 1836. 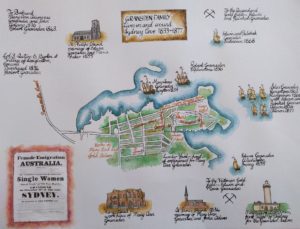 I based this on an early map of Sydney from when the first of the Gransdens, focused on in this map, arrived in Australia. I then used the boats to represent all of their trips. Each of the buildings has a connection to the lives the Gransdens lived.

All the male Gransdens who arrived in Sydney were sailors so the light house was the first thing they had to look out for when they arrived in Sydney. The Churches are where some of them were married, the places with notation were things like, the lumber yard where Mary was employed from. She went to work at the Kings Head. Unfortunately we don’t know what that looked like when she worked there but the picture I painted is of the hotel during the life time of the family.

The the road to Parramatta is present because one of the Gransdens owned property further along that road and most of them at some stage had to travel that road to get to Bathurst where both Robert Gransden and Mary Ann Gransden and their families lived at some stage.

I pulled in elements to create something that was representative of the family. I drew the pictures and used the paintings to give a larger sense of space than they have in modern day Sydney. This was to give more of the sense of space that the original buildings would have had during this families time in Sydney.

The colours are also representative of two things. The reds around the advewrtisement show the initial fear, excitement and uncertainty of the trip and resettlement. The blues and greens around Sydney are more representative of the ideal, the dream, than they are of reality. Reality would have been much dustier and dirtier than that.

This project helped to give me a more cohesive overview of the Gransden families lives. It helped me to put them together as a unit, rather than to have them as individuals with their life events isolated from each other.