North Auburn Methodist Church was the scene of a very pretty wedding on August 1, 1925, when Miss Marjorie Lockwood, of Auburn, was married to Mr. Stanley Lawrence, third son of Mr. and Mrs. J. Lawrence, of “Ashley,” Smithfield. Rev. W. N. Lock officiated. The bride’s smart frock of ivory charmante was trimmed with silver lace and shell pink ostrich feather. Her tulle veil, which was hand-embroidered by her aunt, Mrs. Condle, was fastened with silver bandeaux and orange blossom, and she carried a pretty shower bouquet of roses and snowdrops, which, together with a diamond brooch, was the gift of the bridegroom. Tile bridesmaids were Miss Doris Lockwood, who wore a charming frock of pleated lemon georgette, with black georgette hat, and carried a bouquet to tone. Miss Evelyn Lockwood, whose pretty frock of eau de nil crepe do chine was hand-embroidered, also wore a black georgette hat, with bouquet to tone, and Misses Hilda Lockwood and Thelma Sclater were frocked alike in shell pink crepe de chine, embroidered, and wore black hats trimmed to match; they carried gold baskets of mignonette, maidenhair, and violets. Their bouquets and gold bangles were the gifts of the bridegroom. Mr. Stanley Coleman was best man and Mr. Wesley Morrison groomsman. The bride was given away by her father, and during the signing of the register, an uncle of the bride, Mr. Laurie Barber, sang “Because. Mrs. A. E. Hunt aunt of the bride, officiated at the organ. 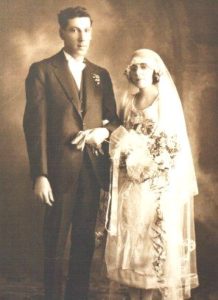 Stanley Lawrence and Marjorie Lockwood at their wedding 1 Aug 1925.

After the ceremony, the bride’s mother who wore a smart frock of black charmante, trimmed with silk tassel and, embroidery, entertained about seventy guests at St. Phillip’s Hall, where the usual toasts were honoured at the breakfast, and the evening finished with a dance.

During the evening, the bride and groom left by car for the South Coast, the bride’s frock being of hand-embroidered navy morocaln, worn with fur stole and cinnamon felt hat. Many handsome gifts were received, amongst them being several cheques. The bride’s gift to the bridegroom was a Jacobean smoker’s pedestal. Mr. and Mrs. S. G. Lawrence Intend taking up residence at Ryde.