Mary Russell age 52 died Athlone Street in the Parish of Camperdown in the County of Cumberland.

WHEREAS my wife, MARY ANN RUSSELL absconded from her home on Sunday the 27th June without just cause or provocation ; the public are hereby cautioned against trusting her, as after this notice I will not be responsible for any debts she may contract. Any person found harbouring her will be prosecuted to the utmost rigour of the law.

Given the possibility that our Mary Ann and William Russell were not living together at the time of Mary Ann’s death this opens up the searches for where Mary Ann may have lived in the last part of her life and where she may have died.

Athlone Place was a street in the Blackwattle Creek Slums of Sydney, now part of Ultimo. A description of Athlone place was written by a City Health Official in 1890.

There had been a heavy storm the evening before my visit to this street, and the water marks were plainly visible. The water was six inches above the floor in a few of the houses on the north side … From No. 11 to 27 there were the most offensive cesspits it has ever been my lot to come across. The yards were ill-drained and very damp, the open drain from one house running through the yard of the next, and so on … At No. 33 there is a cellar, which had 2 feet of stinking water in it. The tenants in this case have had constant ill-health, but have continued living here for ten years. There has been sickness in almost every house, typhoid fever and diarrhoea have been very prevalent (Clay 1890:4). 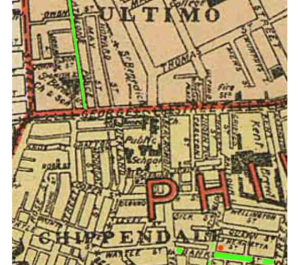 If Mary Russell moved back to Sydney when she left her husband then it is possible that she would have lived in a slum area like this. People in these areas were working class people struggling day by day to live. Mary had an educated mother who had been able to teach when she left her husband but Mary may not have had these same opportunities and even if she did teaching would not have enabled her to live a life of much comfort. 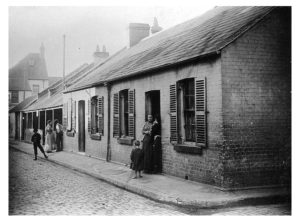 Athlone Place, Ultimo, c.1900. Athlone Place was resumed by Council in 1906, when some 400 dwellings and a maze of tiny lanes were removed. The area was subject to flooding and it was considered a deplorable slum. This photo shows two groups of semi-detached, single-storey buildings, with neighbours and children standing in their doorways chatting.
(image: City of Sydney Archives, CRS 51/6)
http://history.cityofsydney.nsw.gov.au/sydneystreets/Lost_Streets/Laneways/51_1_6.html

The Mary Russell who lived in Athlone Place in Sydney died in 1864. On the death certificate she is noted as being 52 years of age. This would give her a birth date of 1812 or there abouts. This fits in with the known details of Mary Ann Russell nee Gransden. The only other details that the death certificate for this Mary Russell gives is that she was buried at Camperdown.  NSW BDM, Russell, Mary. Death Cert. Vol 122C No 12256. A further search of the Camperdown Burial Butts elicits two further pieces of information, Mary Russell died of Natural causes and she was buried in a paupers grave with no headstone. 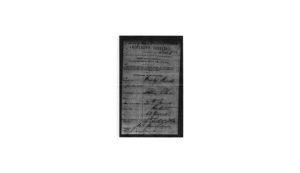 If this is our Mary Ann Russell nee Gransden there is still not enough information to confirm so at this stage.

For further details on this subject go to;