“This is the wildest looking place ever was seen. We are quite near the shore trees growing out of the heart of rocks, which are all free stones and very soft, which I think is rather remarkable, plenty of Oysters growing upon them. The town is pretty large, at first sight you would take it for a camp, the houses all straggling, all one story & white. Very few of the natives is to be seen at Sydney, five or six canoes, with a man woman & child with there (sic) fishing gear, both men and women go stark naked. I never saw such ugly people they seem to be to be only one degree above a beast they sit exactly like a monkey. The men knock out the right fore tooth & the women cuts off the two first joints of there (sic) left little finger.”[1] 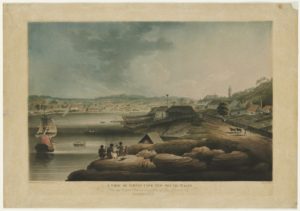