I have a photograph for this wedding, however, it is unfortunately very blurry as it was taken through glass. The original was unable to be taken out of the frame. However, it is still a lovely photo.

A very pretty and popular wedding took place at the English Church at Cranbury on Wednesday,  25th of June, when Miss Ethel, youngest daughter of Mr. and Mrs. Burrell, and Mr. Thomas Gransden, of Burdett, were united in the happy bonds of matrimony. The bride looked charmingly pretty in white georgette, handsomely embroidered, and wore the customary wreath and veil.

Miss Dorrie Seaton, niece of the bride, acted as bridesmaid and was daintily attired in a pale blue dress and cap, and wore a gold bangle, the gift of the bridegroom. The bridegroom’s gift
to the bride was a pretty gold necklet and pendant. 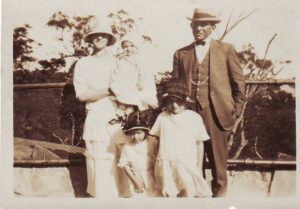 Tom and Ethel Gransden and children Lola, Ida and Clarice Abt 1924