On the 28th of March 1799 at the Lent Assize at Tauton Castle Mary Stevens first encountered Justice Buller. Justice Buller had a reputation as a hasty and prejudiced judge who had once declared that a husband could thrash his wife with impunity provided that he used a stick no bigger than his thumb.[1] 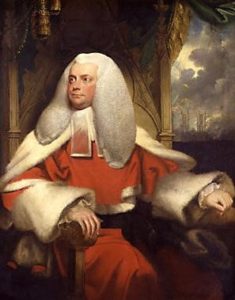 Sir Francis Buller was a wealthy man who was well educated and had every advantage in life. He went into law in 1763 and quickly made his way up the ladder to become a Kings Bench judge in 1765. Judgel Buller presided over a number of celebrity trials including the trail of the Duchess of Kingston. He presided over both of the Assize Trials at Taunton that Mary was present at. Mary’s trial in 1800 was one of the last ones that he was judge at as he died just months later on the 5th of June after falling ill during a game of picquet at Bedford Square.[2]

When Mary was bought before Justice Buller she would have felt keenly the inequity of her situation. Here was one of two powerful men who had enjoyed every advantage and privilege and she was a young woman of around 21 years of age who had been caught stealing 17 yards of Printed Cotton from Thomas Andrews.[3] By the 1790’s cotton was no longer the valuable fabric that it had been just a hundred years earlier but 17 yards of the material was still a considerable sum. In the case of Mary Stevens, when she stole 17 yards the value of the cotton was 30 shillings, just 10 shillings more and Mary Stevens would have faced a death sentence.[4]

Mary was sentenced to 7 years transportation beyond the seas.