For the Diploma of Family History I have to put together an outline of some family history research that I am going to do. So this seemed like a good time to re-visit my old bug bear ‘What happened to Mary Ann Russell nee Gransden’?

So the aim of my research project is ‘To find what happened to Mary Ann Gransden, did she really marry the convict William Russell per Asia or did she marry another William Russell? Where and when did both William and Mary Ann die? 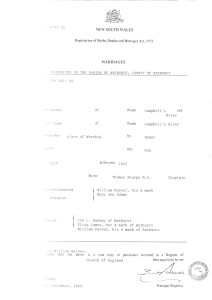 Then of course there is the question, where did they both die. A William Russell arrived in Bathurst from Rocklea in 1882, see below.

VAGRANCY. – William Russell, 70 years of age, was charged with vagrancy. He had come into town from Rockley and applied at the lock-up for relief, seeking admission into the Benevolent Asylum. He said he was without friends and was suffering from rheumatism. The Bench gave him an order for admission into the Bathurst Hospital, from which place he could be forwarded to the Benevolent Asylum if proved to be a fit subject.

This William Russell is the right age for my William Russell and he was in Rocklea where other members of Mary Ann’s family were known to live. So this is a possibility. In which case, as he is alone and friendless Mary must have died well and truly before this date.

In 1862 there was the flood and a very harsh winter, it is possible that Mary Ann died at this time as there are records of William after this date but so far I have not found any further record of Mary Ann post this date. A death at this time may even go relatively unnoticed at a time when so many other people were missing. If William was away he may not have every known what happened to Mary himself. Alternatively, other members of this family have, on occasion, just up and left their partners and started a new life elsewhere. This is not outside the realms of possibilities.

Then, there is George Russell, the eldest son of William and Mary Russell nee Gransden. George Russell was or maybe was not, married to Margaret Beattie who may also have been called Margret Bullough. On the day before George was supposed to be in Court defending against an accusation of ‘making a false declaration’ because he put Margaret down as his wife on the birth certificate of their son George Loftus Russell, George accidentally over dosed on morphine while trying to get to sleep before the Court Case. Instead of attending Court to defend herself, Georges titular wife ended up attending a Coroners Court. On Georges death certificate his mother is down as unknown.

There is still so much to find out about this family. I had thought that I had a fair handle on this particular family but going back and looking over my database in detail and having to explain to someone else what was happening has made me realise just how much information I have still to go before this family truly starts to make sense.

The full article on Georges death can be read here-

Death from an Overdose of Morphia