For many years my research, and that of others who had researched the Gransden Family in New South Wales, had lead me to believe that William Russell per Asia had been the husband of Mary Ann Russell nee Gransden. But the evidence finally stacks up enough to say categorically that this is just not the case.

William was the correct age, he was in NSW and with the limited information we had at the time he looked like a good match. But over the years I have stacked up enough information to say that this William Russell probably never lived in Bathurst where Mary Ann was having her children with a William Russell.

Originally I found information that William was assigned as a Convict to Timothy Nowland in Maitland. This was not enough to say that he was not our convict. After all just because he was assigned to someone in Maitland did not mean that either of them stayed in Maitland. However, this was enough for me to start looking.

I came up with two pieces of interesting information that showed William Russell was located in Maitland at the time he received his Ticket of Leave.

Then came some information about William’s pardon. This made some sort of sense. William and Mary Ann didn’t marry until 1847 even though they had children prior to 1847. So it was possible that they were waiting until he obtained a Conditional Pardon. But even if that was the case, his marriage on the 6th of March 1847 didn’t actually make sense as his Conditional Pardon did not come through until December of 1847. William would have needed permission to marry.

By this stage I was beginning to be pretty certain that we had the wrong William Russell but it always pays to be certain about these things. So I did a Trove search. I found an article placing William Russell, Asia, in Maitland in 1855 having lost the documentation for his Conditional Pardon. 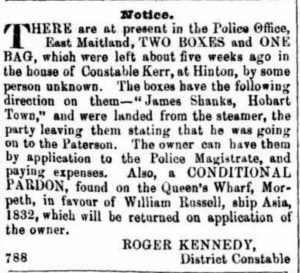 I have now found William requesting permission to marry Catharine MeKesey in 1832. To date I have been unable to find a marriage certificate for this pair so it is possible that they never married.

Then to cap it all off, today I found William Russell being admitted to Gaol in Newcastle in 1856. He is described as 5 foot 6 inches with tattoos that include a woman on his right arm and a man and a woman on his left arm. He is also described as of sallow complexion and balding.

So today I say goodbye to William Russell. I have known for some time that he is unlikely to be our William Russell but I can no longer convince myself that he may, through some chance, still be the correct person. I now have William located in Maitland or Newcastle from the date he was assigned right through to the date he entered Newcastle Gaol more than 20 years later. At the same time Mary Ann had seven children to a William Russell in the Bathurst area. Mary Ann’s William Russell and William Russell per Asia cannot be the same person.

Now, where is my William Russell? He was in Bathurst but I seem to have lost him. The hunt will have to start all over again.