Many years ago I had another blog and I put a few Family History posts, mostly when family members died. I am now moving those posts across to hear so that they can become part of this blog.

My first memories of my grandmother are of the chicken coop she had out the back of the house in Byron Bay. My sister had a particular talent for getting into the coup and letting out all the chickens. So one Christmas Grandma gave her a necklace with a tiny bell on it. She said it would mean that she could hear Mandy going to the chicken coop so she would be able to stop her from letting out the chickens. I think this is the essence of how I remember my grandmother, always resourceful with a bit of a playful side and as my brother says, she could occasionally be a partner in crime.

Grandma was borne in Billimare, near Cowra. Her father was a share farmer and carter so large parts of her early life were spent moving around rural NSW as her father worked in different areas. Grandma’s early schooling took place at Eugowra, then later as the family settled down and became more stable she went to High School at Orange. Grandma used to describe the drive to school in a trap, travelling on dirty roads and getting very dusty. The trip would vary in length depending on where her parents were living at the time.

After she left school Grandma worked at a bakery in Orange. She always described herself as a bit of a rebel and it was at this time that she decided that she would like to move to Sydney. Unfortunately the war intervened and she ended up staying in Orange longer, however she was unable to continue working in the bakery and so she got another job working as a nurse in the local hospital. She saw this as her contribution to the war effort. During the war Grandma met her first husband, Jeffrey Carter. They wrote to each other for a while when he was away and after the war they were married only months after he got back. This suited Grandma well as she had wanted to get out of Orange and Jeffrey was a local boy who had moved to Sydney. While with Jeffrey, Grandma had three daughters, Sharon, Lyn and Narelle. Unfortunately Grandma and Jeff’s marriage did not work out and Grandma was left with three young daughters to look after on her own, in Granville, with no family support. It was during this time that she met Bill. 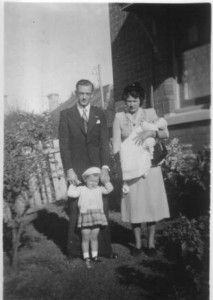 Bill and Grandma lived together for many years and were able to share the care of Grandma’s three young girls, the two new babies Rodney and Graeme and Bill’s other children on the occasions that they lived with the rest of the family. Because of the flexibility of Bill’s shift work Grandma was able to take on some cleaning work. This worked well for them as it meant that they could usually share the care of the children. As the children got older and needed less care Grandma got work at Walton’s, a big department type warehouse. Grandma would do the sorting and ship clothes out to the stores.

On going on a holiday to Byron Bay Grandma fell in love with the area, and she and Bill decided to move. They packed up and moved up to Byron Bay where they bought a trucking business that was run from home. By this stage the older children had left home and the last remaining girl, Narelle, was to move out shortly after the family arrived in Byron Bay.

The trucking business was a success for the family and they ran it until Bill started having health problems and became semi retired. At this stage they decided to move to Coraki. The house they bought in Coraki was an old Queenslander type and was the embodiment of a dream for Grandma. She loved the house, especially the veranda and the feeling of familiarity that it gave her as it reminded her of her own grandmothers house that she had visited so frequently as a child.

During these later years Grandma watched her family grow as each of them first got married and then had children. She was very excited as even her grandchildren had children and she got to see her first great grand children. This extended family meant a lot to her and she loved to see all of us. 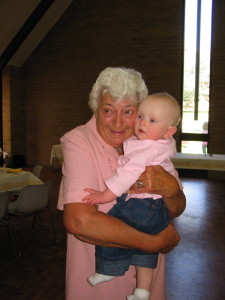 Grandma was extremely proud of all her children. She was proud of her daughters for their independence and although she felt that they were a great distance away from her she was very proud that they had felt able to build successful lives where they were. She also felt proud of her boys, as both had families and made their own lives both near and far from her.

Over the last couple of years Grandma had some times when she was very sick. To help her manage she had moved to a nursing home and this is where she had spent the last year or so of her life. Although I, and others from a distance tried to keep up with her during this time it was difficult. We called and she was out or people were over or she was off doing something. She seemed to be living life to the fullest and loving it. I am sad that I will not get a chance to talk to her again, but I feel it is a wonderful thing that right up to the last she was enjoying her life.

Grandma’s family was extensive and extremely important to her. She kept up with her family right up until the day of her death as was shown by the letter that her older sister Joan received on the Monday after she had died, wishing her happy birthday. She will be missed. 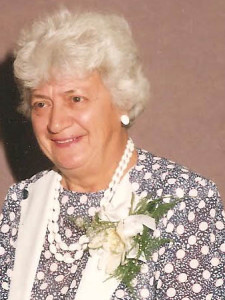