For the next couple of years the Washington Irving with Durant as Captain did a number of runs between London and Sydney. In 1856 the ship arrived in Sydney in March. This time the Washington Irving had been used to drop supplies off at Booby Island, including onions, potatoes and pumpkins.[1] Booby Island is located about 50km off the Cape of York. So many ships were wrecked in the local area in the nineteenth century that provisions were kept there, including those grown on the island, for ship wrecked sailors. Two log books were also kept there, one was placed there in 1835 and another just after the Washington Irving dropped off supplies in 1856. Unfortunately it is not known where either book is now or if they still survive. Mail was also dropped at the island for exchange with ships going in different directions.[2]

On the 1856 trip, yet again the Washington Irving had trouble getting a Pilot to come and pilot his ship into a berth. The Washington Irving was anchored above Pinchgut, Fort Denison, without a pilot. The Ship arrived at about a quarter to 10 on the first of March. By seven o’clock they had fired thirteen rockets, burned blue lights at the mast head and burned a turpentine light but failed to attract a pilot. Eventually a pilot did come out but Captain Durant refused to pay due to the length of time that he had been waiting.[3] Again the Pilot that came out to the Washington Irving went by the name of Hawkes.[4]

The next time Captain Durant arrived in Sydney was to be even more eventful than his 1855 trip. The Ship had sailed on the 19th of June with 308 Government Immigrants on board.[5] The Pilot John Waters, took charge of the Washington Irving as it left Portsmouth. At about 7pm off Lepe near Hampshire, a violent squall struck the Washington Irving carrying away the jib-boom and the foretop gallant-mast. When clearing away the wreck a crew member fell overboard. At once a life buoy was thrown to him. However, on this case the Washington Irving was fitted with the new Clifford’s Lowering Gear. This enabled the crew to lower a life boat and save the life of the sailor who had fallen overboard.[6] Clifford’s Lowering Gear was a new and speedy way of enabling sailors to lower a smaller boat from their ship. It was instrumental in saving a number lives within months of it first being fitted to ships in the 1850’s.[7]

This time there were no problems with a Pilot not arriving on time to berth the Washington Irving. This time a Mr. Robson arrived and piloted the ship in. Robson had arrived whilst the Washington Irving was still outside the Heads and as far as Captain Durant was concerned “gave every satisfaction”.[8] However, the troubles with the Pilots not arriving on time were a continual issue for many Captains and for the Sydney Ports. As a result of continual complaints by those trying to berth ships and two fatalities, the Dunbar[9] and the Catherine Adamson[10] due to poor responses from Pilots, poor management by the Pilots and the difficulties associated with navigating into the Harbour, a report of the Light, Pilot and Navigation Board was prepared and submitted to Parliament. Captain Isaac Durant of the Washington Irving was one of fourteen witnesses bought before the Board to contribute to the Report.

The Dunbar had been lost with only one survivor. The Catherine Adamson lost 21 people including the Pilot Hawkes, whose body had washed up some days after the Catherine Adamson went down.[11] Many things contributed to the wreck of the Catherine Adamson including weather, difficulty accessing the ship as it was breaking up and trouble getting boats close enough to get those in trouble off the boat. It was also concluded that the Pilot Hawkes was in “no fit condition” to be Piloting the Ship.[12] The fault can certainly not all be laid at Pilot Hawkes door, but it seems probable that he contributed to the issues experienced by the Catherine Adamson and that eventually lead to her being wrecked. Isaac Durants experiences with the Pilots of Sydney Harbour and in particular the Pilot Hawkes were certainly not isolated incidents. These two wrecks resulted in an investigation into the Pilots of Sydney Harbour and the building of the Hornby Light on the tip of Inner South Head to help increase safety for ships negotiating such a difficult entry to the Harbour.[13] 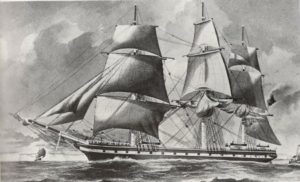 The Dunbar was one of the two wrecks that led to the
establishment of the Hornby Lighthouse.
Image : From Dusk Till Dawn. http://www.lighthouses.org.au/lights/NSW/Hornby/Hornby%20Lighthouse.htm 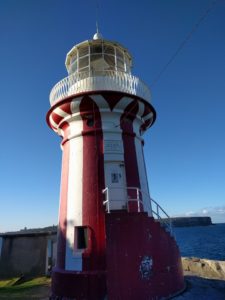 More records are coming out about Merchant Sailors all the time. Tony Robinson has a short clip of some of the new records coming out that I would like to use more.