Two in one week. I have come across two Wills this week where a son has been disinherited in their parents Will.

The first was Alfred Smith. His father John Smith, aka Gentleman Smith was born James Sidebottom, probably in Manchester or the surrounds. He was convicted in 1809 and sentenced to Transportation in Australia. The court details for his conviction in 1809 do not detail what he was convicted for. However, within the family there is some thought that he may also be the James Sidebottom who was convicted, and sentenced and then reprieved in 1806 for stealing a waistcoat. There is also mention of being sent to Australia because of duelling. Based on his later activities and extremely good handwriting, it is certain that James Sidebottom was a very well educated man.

So you would think that this man, who had the most chequered of chequered paths would be sympathetic to a son who was a bit of a hell-raiser. But no, instead John Smith writes his son Alfred Smith out of his Will. How can we tell then that Alfred Smith is John Smiths son? Because he writes him back in a codicil at the same time as he changes his will to limit another one of his sons inheritances. However, by writing Alfred back in, not all is forgiven, he writes him in only in the enjoyment of an allowance during his life and all of the property that provided his allowance is then Willed away from Alfred’s children when he dies. So, not only does John curtail his son but he then inflicts his sons punishment, not so much on his son, but on his descendants.

Codicil, last page of the Will of John Smith. This section re-instates Alfred Smith under certain conditions. Source- Norma Warnecke, photo copy and transcription of original Will.

For years I have had my suspicions about the Bean family and Percy Bean. I don’t know what made me wonder but there seemed to be a conflict between Percy Bean and the rest of the Bean siblings and family. I just couldn’t put my finger on it. He seemed to be missing from a lot of the records of the family when they were together as a whole. This is odd because he is my direct ancestor so I would have expected to find more information with him specifically because he was the person I was looking for. But no. When Percy’s father died there was an immediate response in the paper from Leonard Beans wife and other three children. Percy’s response came three days later and was very muted. But maybe he was in another part of town or away etc?

Then I came across Annie Bean’s Will. Annie Bean was the wife of Leonard Bean and she died a considerable time after Leonard. In her Will Annie refers to her beloved children and she names her three younger children. Her eldest son Percy, his family and children are not mentioned at all. He was obviously at least present for his fathers burial but by the time his mother died he isn’t even in her Will.

Annie Bean must of at least known of the birth of her four Grandchildren by Percy as they lived just over 5km apart. Yet Annie does not mention Percy or his children in her Will. Although our branch of the family have one surviving photograph of one of Percy’s siblings we are not in contact with any of the others. I do not know if we will ever find out what caused the split and why Percy was written out of his mothers Will. 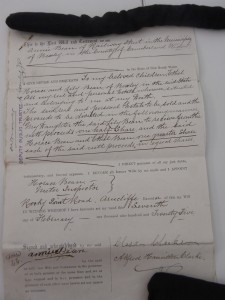