Whilst travelling and photographing for Walkabout Magazine Ray met a number of amazing people who were historical figures in their own right. One of these was Dervish Bejah.

Dervish Bejah was a camel driver, was born in Baluchistan, India (now Pakistan).  Dervish Bejah served in the Indian Army at Kandahar and Karachi under Lord Roberts and eventually attained the rank of sergeant. Dervish Bejah arrived in Fremantle, Western Australia in the 1890’s.

In 1896, Lawrence Wells was appointed to lead the Calvert Scientific Exploring Expedition through the central deserts of Western Australia from Mullewa to Derby. In May he left Adelaide by sea, with Bejah as the ‘Afghan’ in charge of camels. The trip was an incredibly hard one and over the course of the journey Lawrence came to rely heavily on Dervish Bejah.

The members of the party trekked through baron desert with little water. It was Dervish Bejah’s role to gather greenery for the camels and to feed them where available. But this fails to detail just how important Dervish Bejah was to the success and well-being of all members of the party including both men and camels. When the camels were failing due to the lack of water Dervish Bejah would run beside them rather than have them carry him so as to help spell them for a while. He would also go without food when they were unable to get food for the camels. Dervish Bejah had detailed knowledge of how to care for his animals and survive in an area such as the desert.

Later in life Dervish Bejah settled at Hergott Springs (Marree) and bought land there. He later married Amelia Jane Shaw; they had one son, Abdul Jubbar (Jack). The family continued on at Marree. The area had a large Afghan camp with thousands of camels and a corrugated iron mosque. The first mosque built in Marree was constructed as early as 1861 to service the Afghan community in Marree, many of whom were Muslim. Over the years two Mosques were built, one at either end of the town. One of these was abandoned in 1910 and the other destroyed in 1950, just three years after Ray photographed it. A new mosque was built in the area in 2003.

By 1947 when Ray Bean was in Marree Dervish Bejah had been retired for a number of years. Ray took photos of both Dervish Bejah and the Marree Mosque. Dervish Bejah passed away on the 6th of May 1957 in the Port Augusta Hospital. 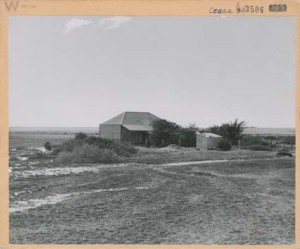 For anyone interested in learning more about Dervish Bejah there are some links that may be of use.