I have been researching Edwin Gransden again and I decided it was time to give a little bit of thought to Edwin’s first wife Maria Baker. I have very little information on Maria and would like to know more as things obviously did not go well between Maria and Edwin.

Two short weeks after arriving in Sydney in 1855 on the Washington Irving, Edwin Gransden married Maria Baker. On his marriage certificate Edwin declared his usual residence to be in Cumberland County – Sydney area, in NSW. Edwin and Maria were married in St. Philips Church in Sydney. St Philips Church had been opened in 1809 and the Reverened William Cowper, who solemnised the marriage between Edwin and Maria was the first Priest to have held office at the Church and for the first 10 years of his tenure he was the only Priest at the Church. William Cowper died in 1853 after having spent the majority of his life working at St Phillips Church in Sydney. 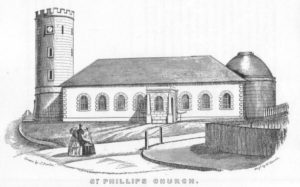 Little is known about Maria Baker other than that she was born in Suffolk England about 1823 and her father, George Baker was in the army. It is uncertain exactly when Maria arrived in Australia however it is probable that she was the Maria Baker who arrived on 26th of October 1839 aboard the Florist. Her occupation at the time was listed as house servant.

The Florist was a barqu, a type of sailing vessel with three or more masts having the fore- and mainmasts rigged square and only the mizzen (the aftmost mast) rigged fore-and-aft. 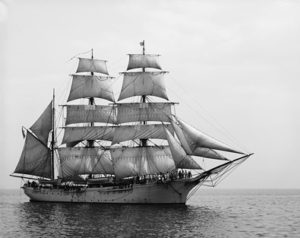 Edwin and Maria were married by banns. In 1215 the calling of banns was introduced into England and Wales. This involved the public announcing of an impending wedding for three weeks leading up to the date of the wedding. This was to ensure that anyone who knew of an objection would have the chance to speak up. On the marriage certificate Edwin declared himself a widower and Maria was declared as a Spinster. As both Maria and Edwin were overage no one needed to sign for either of them. To date there is no true indication of who Edwin’s earlier wife may have been and in what country he may have married her, although Maria at least believed that he had married his previous wife in England. Looking further into the future however, Edwin’s first daughter is called Ellen. In the 1851 Census Edwin is staying with an Ellen Sly or Fly. It is possible that his daughter Ellen was named after this Ellen who he may either have been married to or living with in England.

Both Maria and Edwin moved to Melbourne. From here it is very uncertain what happened to the couple but what is evident is that they split up. Unlike many other separations at this time there is no announcement in a Newspaper stating that Edwin will no longer be responsible for Maria’s debts. Given that Edwin moved to the Goldfields there is the possibility that Edwin either deserted Maria or that something happened that meant that they just lost contact while he was on the Goldfields.

Maria continued to live in Melbourne working as a Housekeeper.

At the time of her death in 1890 Maria Gransden was living in Fitzroy Melbourne and her death certificate states that she is married to unknown Gransden with no children. Maria obviously did not know that her husband had pre-deceased her by just under 20 years.