Longbottom was established as a Stockade around 1792. This was originally built to house the convicts who were building Parramatta Road but later it became a staging point for Convicts who were being transferred to Parramatta. To walk from Sydney to Parramatta was a lengthy journey so the Longbottom Stockade was used to house the Convicts as they took an overnight break. (Blaxell, 2010)

The area of Longbottom was granted to Lt. William Lawson in 1809, it was bought soon afterwards by D’Arcy Wentworth who then returned it to the Government in 1814 in exchange for another grant of grazing land. From 1819 onwards Longbottom was part of a Government farm next to what would later become the Village of Concord. The farm originally stretched from Parramatta Road to the current Suburb of Concord and Cabarita. The farm housed convicts who engaged in a wide variety of activities such as timber getters, charcoal burners, sawyers and shinglers. However, once Governor Macquarie left the concept of the farm no longer found favour with the new Governor and the farm was gradually wound down. By 1828 there were only five convicts and an overseer. In 1838 part of Longbottom Farm was sold and the remainder became a depot for a detachment of the Mounted Police. (Blaxell, 2010)

In 1840, fleetingly new life was breathed into the Stockade as Longbottom Farm once again held convicts. This time they were Canadian Political prisoners. A rebellion had been fomented in Canada in the provinces of Ontario and Quebec. This had been quashed by British troops and a number of the Canadian prisoners were sent to Australia, some to New South Wales and some to Van Diemens Land. Those that had been sent to New South Wales were housed at the Longbottom Stockade. Between 1843 and 1844 free pardons were awarded to the Canadian prisoners and the majority of them had left Australia by late 1844. After the Canadians left there were plans to develop the area in the Village of Longbottom and houses were built in the late 1840-1850’s. It is around this time that Robert Gransden bought his property at Longbottom Farm. (Blaxell, 2010)

See http://www.concordheritage.asn.au/concord-history/french-canadian-exiles-1840 for the details of a memorial to the Canadian Political Prisoners of the Longbottom Stockade.

It was probably this property with any house that had been built by Robert, that Edwin was living in prior to marrying Maria Baker. It is also probably this property that he bought his wife home to after their marriage. Edwin and Maria were married in St. Philips church in Sydney. Unfortunately no records of whether Edwin’s brother Robert Gransden or sister Mary Ann Russell nee Gransden were at the wedding. It is likely that either before or just after Edwin and Maria married they met up with Edwin’s family in either Bathurst or in Sydney. It is nice to think that Edwin took his new bride to the Bathurst area where he had 10 surviving nieces and nephews from the families of his brother and sister. Edwin must have heard a lot about these family members from letters that would have been sent to and from the families in England and Australia. It is also about this time that Mary Ann, his sister disappears from the records. Hopefully she was not so elusive to her brother as she is to those searching for her in current day Australia. 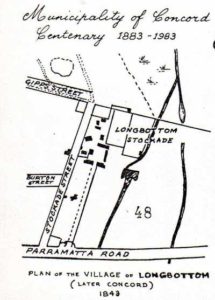