Last week I did a talk for the local Family History Society on Ray Bean. Much of the information that was in that talk I had also blogged about as I was doing my research for the talk. However, when I was working on the talk I realised that of Ray Bean’s ancestors there was one set that I had nothing for, no photo, not even a photo of their graves. For the parents of this couple I had more information and in two cases, more photos then I did for the more recent couple. This was really odd. I didn’t even have anything in my notes for this couple. So of course that means I had to go searching. 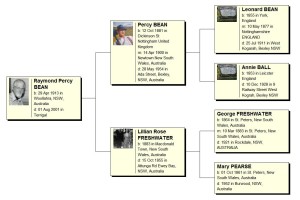 I started to do some searching on George Freshwater and Mary Freshwater nee Pearse. I know a fair bit about their parents but my information on George and Mary was very limited. I still need to get their full death certificates so that I can give exact dates for their deaths and find out where they were buried. But one thing that I did do was go and do a search on Trove. As usual Trove came through for me and I pulled up a number of interesting articles. However the most informative of these went under the misogynistic heading ‘A TANTALISING TART. WANTS HER OLD MAN BOUND OVER.’

The issue was that when Mary turned up to her daughters house, where her husband also lived, he threatened her with a gun and called her “all sorts of vile names”. The case was thrown out of Court because as far as the judge was concerned if Mary turned up at the house that her daughter lived at then it was her problem if she ran into issues with her husband.

Trove came up with a bunch of other useful information as well. For a start it appears that George went bankrupt in 1892 and just two years prior to that he had witnessed the death of John Pickin who, along with a woman, had jumped out of a train carriage onto the platform at Strathfield Station. The woman had made the platform unconscious but later lived, the man had not and had fallen between the platform and the train and has been knocked unconscious also. He had then died on the way to the hospital.

The bankruptcy details can of course be found at the State Archives of NSW. So they, along with the death certificates for George and Mary, are next on my list of things to get hold of for this pair. I have still not found any photos for them but once I know where they were buried I may be able to get photos of their tomb stones if they have any. Just one nights search have bought this couple just that bit more to life. I look forward to finding out what else I can about George and Mary Freshwater. They seem to have been the black sheep of that particular generation.