My research project for the UTAS Course- Introduction to Family History, has been focussed on trying to locate the death of Mary Ann Russell nee Gransden and also on making sure that the William Russell that I have as her husband is in fact the correct one. As part of that research I am off to Bathurst tomorrow to try and find some records that may not be as easy to track down on-line as they are in person. As part of my search I have looked at the documents that I have currently and of course done some more hunting including repeating searches that I had already done in Trove.

Finally I found this on Trove yesterday. 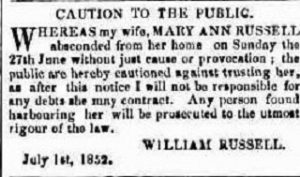 I have the death certificates for two possible Mary Ann Russells one of them is for a woman who died only a couple of months after George Russell died, but she died in Sydney. At this stage this is one of the most likely people to be Mary Ann Russell nee Gransden. Did she leave again after the death of her last child and die? Is this why the name on the birth certificate for George is Mary Russel instead of Mary Ann Russel? Did she never go back and is George Russell the child of a different Mary? Much more work needs to be done to really come up with the answers but finding this announcement gives me yet another avenue to look in.

The next question is, who is William Russell? I now no longer believe that he is William Russell per Asia. Too many of the documents say that this William Russell lived in Maitland not in Bathurst. I am really hoping that my trip tomorrow will help me to answer some of the many questions about this intriguing household.