The next subject for my Diploma in Family History has started. We are researching Convicts.

Unlike the first subject, ‘Introduction to Family History’, this one has jumped right in. We have had some information about convicts we are starting to figure out which convict we will be researching and we have been looking at websites to help us write up our convict research.

One website that looks really interesting is London Lives. This website has a search function and brings up a whole lot of different resources for those who were living in London UK between 1800-1600. Of course this includes Greater London so it has quite a few resources from Kent. So the first thing that I did was plug in the Gransden surname. I came up with a bunch of Wills, most of which I already have copies of, and a Mary and an Ann Gransden’s admission and discharge papers for St Thomas’s Hospital in 1776. The Mary and Ann may well be the same person particularly given the name Mary Ann was one of the Gransden favourites for many years. At this stage I have not located which Mary Ann or Mary and Ann this may refer to but interesting to know that there are admissions for this time at St Thomas’s Hospital.

St Thomas’s Hospital was originally named after St Thomas Becket. It isn’t known exactly when the Hospital was founded but it was describes as ancient in 1215. The original Hospital was run by a mixed order of Augustinian Monks and Nuns and provided shelter for the sick, poor and homeless. 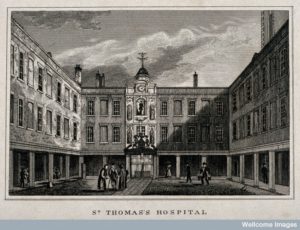 When Mary and Ann or Mary Ann Gransden was in St Thomas’s Hospital it was located at Southwark. Southwark is one of the oldest parts of central London. The hospital had a very large flow through of patient traffic and catered for a wide range of medical conditions from those with venereal disease right through to those who were classified as insane.

If you want to read more about St Thomas’s Hospital you can go here http://www.londonlives.org/static/StThomasHospital.jsp for more details.

If I am unable to find the correct William Russell then it may be time to explore Mary Stevens. Mary was sentenced at Ilchester Court during the Somerset Lent Circuit hearing on 28th March 1799 for “Stealing Goods val. 30/- of Thomas Andrews”. This was for 17 yards of printed cotton. She was sentenced to transportation for 7 years. Mary had been held at the Castle of Taunton whilst awaiting trial. The sentence was confirmed at the Summer Circuit of 1799 and the Lent Circuit the following year. She arrived in Australia on the “Earl Cornwallis” on 12 June 1801.

Mary Stevens is not a Gransden family convict but she is a convict from other branches of my family tree. I would like to know more about her but my priority, if possible is to locate and research William Russell. Mary Stevens is my fall back convict.

So convicts- here I come.