Back in 2011 Geneabloggers did a podcast that focussed on finding female ancestors. One of the things that was bought up very comprehensively in that podcast was the difficulties of tracing women because of their name changes. For example there are the normal name changes when a woman marries a man, but then what happens if she marries two, three or even more times? What happens if she also has a nick name and that is the name that the family knows her as and has written on all of her photos, if there are any, etc?  Sometimes those names may have a link to her name but sometimes they do not. For example I have an Aunty Betty who is not a Betty, or an Elizabeth at all. Her name was Una Jessie and that somehow became Betty. What about all the derivatives of different names, taking the example above Elizabeth could become Betty, Bessie, Eliza, Lizzie, Lizabeth, Lizabet, Bess and the list goes on. Men also have name changes but they do not tend to be as extensive as those for women. It is these name changes that make finding women so difficult in the records.

Given all of this you would think that it would be nice to find some records that actually retain that maiden name and thus make it easier for a descendant to find an ancestor. Today at the NSW State Archives I finally had that experience. A group of records that trace a woman through her maiden name and kept that maiden name for almost the whole of her life. So it came as a surprise to me that I was upset on behalf of my ancestor, that she had been recorded under her maiden name long after the reason for that record had been and passed. You see Mary Stevens was a convict.

Today I looked up Mary Stevens or Stephens in the 1806 Convict Muster, the 1811 Convict Muster, the 1814 Convict General Muster, the General Muster of Land and Stock 1822, and The General Muster List of NSW 1823, 1824 and 1825. In each one of them Mary was mentioned. In the 1806 Muster details given include the Ship that Mary was on and the fact that she was the House Keeper for John Lees. The next two give further details. The 1811 Muster gives the details of Marys trial in Ilchester and her sentence, the 1814 give details of her children and the fact that she is married to John Lees and incorrect details about the ship she came out on, although this is corrected in the Appendix.

The difference between the 1806 census and the 1811 and 1814 census is that in 1809 Mary had married John Lees, yet she was still being defined by her name as a convict despite obtaining her Freedome through servitude in 1811. Mary was also being defined by her marriage, the “wife of John Lees” rather than any occupation, even child carer, home duties etc. Her children and husband are all on a separate page together while Mary is on her own page under her maiden name, branded as convict.

The next two musters again define Mary by her convict name and only once that is done do they define her in terms of who she was married to. By the 1837 Muster Mary is no longer mentioned. At this stage it appears that the NSW Government had realised that they had no ability to force those who were free to turn up to convict Musters. I suspect that I am not the only one who finds it a bit upsetting that a person was still being identified by their crime long after they had paid their dues and done their time.

Mary died in 1839. Even here she is an adjunct to her husband as her tomb stone has just her name, no other details and it is at the foot of the tomb stone of John Lees. In the register book her name is Mary Stevens, wife of John Lees. In many ways it is great to be able to find Mary and follow her through her life. In other ways it is upsetting that Mary is defined not by who she is but by the one time she was caught doing something wrong and by her husband. Once in Australia there is no evidence that Mary ever committed another crime yet her crime defines her life. 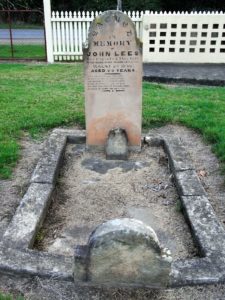 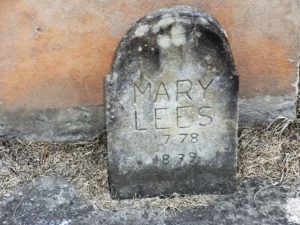