Today I read through part of the diary of Winifred Eva Duncombe (Dunc). Dunc was one of a party of walkers that went down the Colo River in early 1934. The trip was lead, as much as it was lead, by Niann Melville. The rest of the party comprised Rene Brown, Iris Rockstro, Wal Melville, Ben Fuller and my grandfather, Ray Bean.

History of the Colo River

The original inhabitants of the Colo River and surrounds were members of the Darug people. The Darug people are a nation of people that are divided into smaller clans who tend to live in a particular geographic area, the members have a common language. Each clan consisted of 50-100 people and inter-marriages within clans was common. Thus the clans were interrelated in a physical sense as well as through a united language. Approximately 70% of the Darug nation were wiped out post first fleet due to Small Pox and other diseases. Today the language is being revived and is now spoken by some members of the Darug languages.

The vast majority of the Colo River flows through the Blue Mountains National Park and the Wollemi National Park. The River itself seems to alternate between hurriedly flowing rapids and deep pools.

Governor Phillip undertook the first white person expedition up the Hawkesbury and into the Colo River in June of 1789. He was accompanied by Captain Hunter, Captain Collins, Captain George Johnston and Surgeon White. The party rowed 12kms up the Colo from the Hawkesbury and named the Colo River ‘Second Branch’. Settlement started in the 1800’s with the first grants of land in the area occurring in 1804. Additional grants were made in 1833.

The first full survey of the Colo River was done in the early 1830’s by Frederick Rover D’Arcy.  With another Survey conducted in 1883 for a possible railway to go West from the Richmond via the Colo Valley. This survey was conducted by George William Townsend. This initial survey was then complemented with a more complete survey, once again conducted by George Townsend between 1883 and 1887. George Townsend recommended the Colo River route as a good option for a railway, however The Engineer in-Chief Mr Whitton, disagreed with Townsend’s analysis and thought that the cost of the proposed railway would be too high. At the time T. H. F Griffin commented on the Colo …is amongst the most rugged and impassable to be found in the colony…” (http://www.diamondspirit.net/adunk/townsend.html). 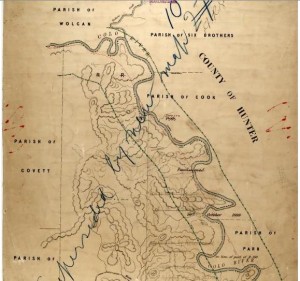 A later survey was conducted by Lt Col. Hugh Powell Gough Clews, according to the History of the Colo River website (http://coloriver.com.au/history.htm) this survey was conducted in the 1930’s. At this time Lt. Col Hugh Powell made multiple attempts to survey the area of the Colo River and ended up nick naming the area- ‘The bad bit across the River’.

In 1931 an earlier walking trip down the Colo River was undertaken by Max Gentle and Gordon Smith in―an atmosphere of terrible wilderness to quote Max (The Sydney Bushwalkers- The First 60 years).

Which brings us to the walking party that included Ray Bean in 1934. The party started on the 6th of January with everyone in good spirits despite some terrible weather with lots of rain and lightning. The members of the walking party arrived in Lithgow where they me Mr Young and his Chevrolet lorry who was going to take them to Newness to start their walk. The road was extremely rutted and the trip uncomfortable with the members of the party sitting on the floor of the Lory. Ray and Wal seated in the back on what they had a first thought of as empty bags but which they very soon found contained tools, making them a very lumpy place to sit.

As the trip continued the boys and Mr Young had to get out of the truck on occasion to shift trees of the track and the truck had to dodge a land slide on one occasion. All the while Ray and Wal were leaning out the back of the truck with a torch carrying on “a lot of tomfoolery about being in a boat”. Every now and then the truck would go into a pothole and everyone would slide over to one side of the truck with their packs on top of them.

Finally the party reached the Wolgan, it was decided to drive the truck across the Wolgan and continue their trip. However the truck became stuck half way across the River. My Young and the boys tried all sorts of tricks to get the engine started but to no avail. Instead Dunc and Ray headed over to one side of the River to start up a fire. Everyone had dinner, put their tents up and went to bed. The rain continued to come down and a number of members of the party became very wet during the night. The next morning the walking party left Mr Young still in the middle of the River with his truck, and headed off to walk to Newness to start their walk. 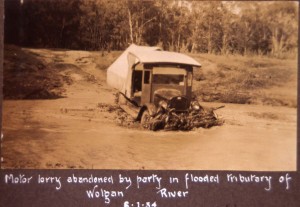 In Newness the party were regaled with stories of how bad the going was and how they would not be able to make the trip so they would be better off giving up now. They were also warned of dangers other than snakes and it was suggested that they take a gun. This they refused to do and the party continued on their way despite the dire warnings.