In 1948 Ray Bean went on a 10 week trip around Western and Northern Australia. He was one of a party of people who went on the trip, the others being the novelists John Ewers and Arthur Upfield, Tasmanian naturalist Michael Sharland, a mechanic and cook. Ray was the photographer of the group, although Michael Sharland was also an accomplished photographer. Today I was at the State Library of NSW and was able to take photographs of some of the many hundreds of photographs that Ray Bean took, including many of the ones that he took on the 1948 trip.

The trek was undertaken in two trucks from Kalgoorlie through to Wilunda then onto Port Hedland. From there they followed the coats to Broom and Derby before trekking inland through Fitzroy and then onto Wyndham. The return journey then followed through to Port Headland again and then along the coast to Perth. 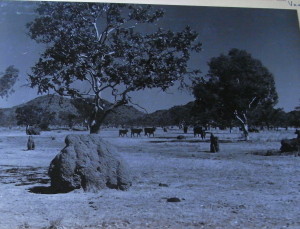 Western Australia Trip 1948. R Bean. Out of Copyright, copy from the State Library of NSW

The trek was fast paced and exhausting however it provided material for the novelist, in particular Upfield to use for Walkabout magazine and also for the setting for the Boney novel The Widows of Broome and another part of he trek to the Wolf Creek meteorite crater was used as the setting for another novel, The Will of the Tribe. Ewers also made use of the trek in some of his travel work. Ray used the extensive photographs that he had taken for Walkabout magazine and in fact they comprise large amounts of the photographs in Walkabout magazine for the majority of 1948.

Upfield wrote about a half caste Aboriginal detective called Boney who was a detective in out-back Australia, it was this character he was researching for when he went on the trek in 1948. In the 1920’s Upfield had unwittingly provided a real life murderer with the perfect way to get rid of a body, through his research for the book The Sands of Windee. In the book he wrote about a murder with no body. He had initially had a lot of difficulty figuring out how the murder had rid himself of the body of his victim so he mentioned this to a colleague, George Ritchie. Ritchie came up with a disposal method; burn the victim’s body with a large animal, sift our all metal fragments and dissolve them in acid and then pound any remaining bone fragments into dust and discard them. However, Upfields problem then was that he couldn’t find the plot hole to enable his detective to unravel the murder. As a result he offered Ritchie £1.00 if he could figure out a plot hole. Ritchie was unable to do so. Gradually the difficulty of finding a plot hole in this type of body disposal got around as Upfield discussed his difficulties with friends and colleagues.

Shortly Snowy Rowles found out about Upfields difficulties. Upfield and Snowy knew each other and Upfield was talking to a number of people about his difficulties with the novel he was currently writing. Before the Sands of Windee came out but after the research was being undertaken Snowy Rowles used the method for body disposal that Upfield and Ritchie had come up with. In 1929 two men, James Ryan and George Lloyd disappear. Snowey Rowles had been the last person to see them. Less than six months later, another man Luis Carron also disappears, again Rowles had been in the vicinity. 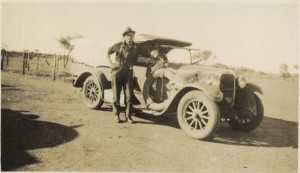 Snowy Rowles and James Ryan’s car.
Rowles was convicted of the murder of James Ryan. He disposed of Ryan’s body using methods similar to those of a murderer in Upfield’s 1931 novel The Sands of Windee.
Photographer Arthur William Upfield.
Out of Copyright- held by the National Library of Australia

The police had also been very aware of the discussions around Upfields difficulties with the plot for his book, plus they were aware of Rowles activities with the missing men. Detective-Sergeant Manning also recognized Rowles as a John Thomas that was wanted for another crime in Manning where he had escaped gaol for burglary.

As it happened Rowles had followed the body disposal method for Ryan and Lloyd exactly but he had missed a step in the process for Carron, thus leaving metal evidence behind when he disposed of the body. Carron’s wedding ring was distinctive and thus it was able to be used to identify the fact that he was missing and his body had been in the area. It was also possibly to link Rowles to the area and to prove that he know of the Upfield and Ritchie body disposal method. Rowles would found guilty and hanged for the murder of Carron. Not enough evidence was found to confirm that he murdered Ryan and Lloyd so he was not tried for their murders, however, there was little doubt that he had done them.