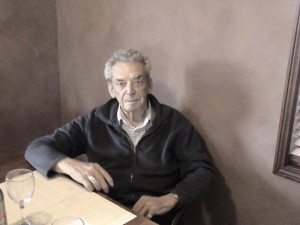 My relationship with my grandfather really developed over the last six years. Our family had gradually lost contact, and while researching my family tree I came across some details suggesting that my grandfather was still alive. Through other family contacts I tracked him down and he was reunited with the majority of us. In the process I found out a lot about my grandfather and what his life had been like up until the day that we saw him again.

Grandpa was born in Manildra in 1924. His family had lived in Manildra for a long time and all his childhood memories are centred around growing up there. One of his most precious memories was of his father bringing home his first truck. Grandpa’s father was so proud of his new green 1928 Chevy truck and always kept it clean and shiny. Grandpa/ Jeffrey was about four at the time and thought he would help his father keep the new truck clean, so on the day it arrived as the rest of the family were celebrating, grandpa went out to clean it. It had been raining the day before so he used the water from the puddles near-by to wash the truck. He cleaned as high as he could reach, all the way around including the chrome and the emu on the front of the truck. Then he went inside as the truck dried. It was a few hours later as the family was saying goodbye to those that came to visit that they went outside to see the truck covered in muddy smears as high as a five year old boy could reach.

Being from a relatively poor family grandpa did not go onto high school. He moved to Sydney where his mother had moved before him and got work. At first he worked in a biscuit factory in Ashfield but during the war lots of workers that were considered to be doing non-essential work were moved onto other jobs. Grandpa was one of these and he was moved onto a condenser factory. As he was quite a pernickety man this didn’t really appeal to grandpa, in his own words “it was to oily”. However even here he saw the opportunity for a bit of a lark.

One of the workers who went by the name of Mick was known for going into the toilets for a nap each day. So one day they ran a copper wire to the toilet seat and attached it to a couple of condensers. Its not known how many volts hit Mick that day but apparently it was the last time he sat down at a toilet before checking around the bowl.

Not long after this grandpa went to war. Aside from a large amount of training he saw fighting in New Britain. It was here that he was injured by a daisy cutter, so called because they flew low and when they exploded they would trim the grass around them with the shrapnel with which they were loaded. The advice from older and wiser soldiers was not to drop when these came near as it was better for them to damage your legs than your face and head. Grandpa adhered to this advice and had reason to be glad. His leg was damaged badly but he lived to tell the tale.

On leaving the war it was not long before grandpa married a girl that had written to him for some of the war. He always claimed that the three best things he ever did was as a result of that marriage, his daughters Sharon, Lyn and Narelle.

Unfortunately Jeffrey and Shirley’s marriage didn’t work out and so they separated. Grandpa later married the woman who was probably the love of his life, Mary. Together they travelled and spent many years together. During this time grandpa’s career took him into the corrective services, first as a prison officer and later as a senior facilities manager. Grandpa loved this work as it gave him many opportunities to go to courses to educate himself and to better his own situation. Grandpa thought that education was incredibly important and even if he could not have the formal education that he wanted he didn’t see this as a reason to stop learning. This was a characteristic that he showed throughout his life and his daughter Sharon attributes her love of classical music and history to evenings spent with him, as a young girl when her mother and sisters had gone to bed. 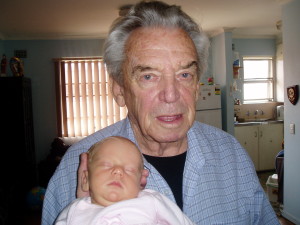 In later years as we got to know him, my grandfather would talk about his memories of his children and what they had been like when they were little. Of my mother he remembered a train trip when they played a game called mouse trap. The idea was to hit the others hand. My mother was very exuberant about the way she played this game and ended up giving my grandfather a blood nose. Auntie **** he remembered as gregarious and chatty never sitting still and always ready to go off and see the neighbours. I think that much of this is still characteristic of Auntie Lyn and like my grandfather I rely on her to keep me up to date with all the goings on in her side of the family. Auntie **** was much younger when my grandfather left, but he still had memories of her that he liked to share. One of his most fond memories was of taking her into a shop and looking around as he heard laughter to see her parading around in one of the wigs. (Names removed of people still alive).

My grandfathers memories of his life are very special to me and I am really glad that we were able share them and others. He was able to see his family grow to include not just his three daughters and seven grandchildren but also five great grandchildren. He loved to go out with me and my family and tell everyone that I was his grand daughter and to introduce them to his great grand children. I am sorry that he didn’t live long enough to hear that his family is growing even more and that another great grandchild is due. He would have been very excited by this news.