At some stage between 1855 and 1858 Edwin Gransden ended up at Mount Alexander near Melbourne. Mount Alexander was in the heart of Gold Country and Edwin certainly had an interest in gold as shown by a newspaper article in 1858 showing Edwin asking for a partner in a Puddling Machine. A Puddling Machine, introduced in 1852, is a machine that breaks up gold bearing clay and dirt, with a heavy stone drawn by a horse, allowing gold flecks to sift to the bottom of the channel and be made more accessible.

WANTED a Partner- The advertiser being about putting up a Puddling Machine, wishes to join another as mates in the concern. Any party having a small capital, and wishing to join, may hear of further particulars by addressing a letter to Mr. E.
Gransden, at Mr. Parker’s Mount Franklin, Hepburn. 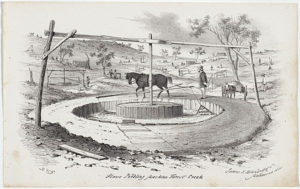 Doing some research into Mount Alexander I came across a youtube video that gives a nice potted history of Mount Alexander and what it was like to live there during the Gold Rush years that Edwin Gransden was there for.