Stan Ipsen was a dear friend and who passed away in 2011. When he passed he was compiling some information for me on the family tree. It is information that I never received as his health prevented him from ever sending it to me. I was reading his last email to me this evening and did a search on him just to see what popped up. Unsurprisingly what popped up were the details of his marriage to Joan Gransden in 1952.

Under the heading of ‘Diana’s Diary’ came this lovely entry.

About 100 guests were present at the wedding of Miss Joan Gransden to Mr. Stan Ipsen
on Saturday evening. The ceremony was performed by the Rev. Fr. Haley at Christ Church. The bride’s frock was of white guipure lace with a train. It was a simply cut, slim fitting frock with a
square neck and short sleeves. With it she wore a three-quarter tulle veil attached to a Juliet cap of guipure lace and satin. Mrs. Nind. who was Matron-of Honour, wore mauve organza with a Juliet cap to match. Best man was Mr. Norm Lapham and the bride was given away by Mr. Geoff
Tozer. Mrs. Tozer was hostess at the reception held afterwards at the Catholic Palais.

Mr: and Mrs. Ipsen are spending a short honeymoon at Mandorah and will live in Darwin. 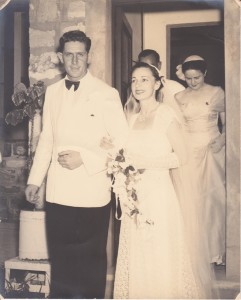