At least two of Steamboats that Ray photographed were partially sunk. In the 1940’s a lot of these boats were no longer seen as useful but had not yet become valuable as historical artefacts and examples of our past. So they were just left to rot. However, over recent years a number of these boats have been raised and fixed up and have a new life.

In 1947 just prior to Ray Bean’s trip down the Murray a letter was published in the Adelaide Advertiser. It mentioned “the good old barges strung together at Morgan just rotting”. At that stage, according to the Newspaper there seemed to be some film being made about the barges. The quote was “I hope Lt-Col. Tolley will make his moving, pictures available for the public to see.” I don’t know if he ever did make his moving pictures available but there are certainly some lovely youtube video’s out there about some of the steamboats that Ray Bean photographed.

One of the steamboats that Ray photographed was the Alexander Arbuthnot. 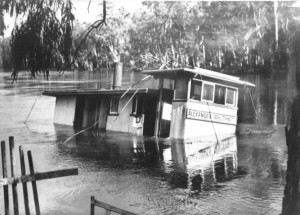 The Alexander Arbuthnot had sunk earlier that year when the river had risen and the Steamboat had been tied too tightly. This had meant that it had not been able to rise, with the tide, high enough to stop water from coming in over its bows. The Alexander Arbuthnot was built by Arbuthnot Sawmill at Koondrook, in 1916, as a barge, and named after the sawmill’s founder. In 1923 the barge was converted by the addition of an engine and superstructure. She then became a steamer and for many years towed barges laden with red-gum logs from the nearby forests for the Arbuthnot Sawmills.

There is a lovely video of the Alexander Arbuthnot as she is today on youtube.