Richard Lees had a troubled career spanning a number of decades. Mostly he was a carpenter who ran to petty theft and other minor misdemeanours. In the early days, these seem to have been focussed on trying to provide food for himself and his family, mostly that of his father and mother and the remaining children of the Lees family. Later his misdemeanours became more adventurous.

Richard Lees, son of John Lees and Mary Lees nee Stevens was born in the Colony of New South Wales in 1805. In 1833, according to the Gaol Admission information about Richard, he was a tall, stout man with straw-coloured hair and brown eyes. Richard had a smattering of freckles across his face, probably due to continuous work in the sun, as a farmer and carpenter, in the early colony. He also had a small scar under his left eye.

In one of Richard’s earliest trials, he was arrested and held at Penrith before being handed over to stand trial at Windsor. Richard may well have spent his time at the Emu Plans convict farm, close to Penrith, where he would have been expected to help with the farming prior to his trial at Windsor.

The Windsor Court House was built in 1822 and this is where Richard would have faced his trial. The Windsor Court House was an imposing building. Richard would have faced a magistrates bench composed of military officers. Richard got off lightly with this early case, so his fathers standing as an ex-soldier, farmer and religious man may have helped Richard. 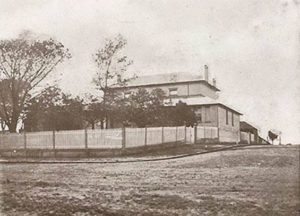 The King of the Prosecution of Joseph Ludd

Information for a Larceny

Richard Lees states that on Monday the 30th May 1831 he was proceeding on the Road from Penrith to Sydney and at Dean’s on the Western Road he fell in company with Prosecutor, since circumstances took place- between them respecting the Examination of Thomas Bean at the Penrith Court House, a short time after Prosecutor saying he was going to Sydney, we agreed to walk together, we called at several places on the road and had something to drink until we arrived at Snowden’s were we had supper after which Prosecutor finding himself the worse for Liqueur wished to go to bed and desired me to take care of his handkerchief and some papers stating he was incapable himself. I did so- the following morning he enquired for his Handkerchief- I produced it and told him to come along and I would give it him on the Road at the Parramatta Turnpike.

Prosecutor being some distance behind. I took coach and proceeded to Sydney on the following morning I saw Prosecutor and gave him a letter directed to Mr Forbes which he had given me to take care of and I told him if he would go with me to my Lodging I would give him the Handkerchief as I had left it there, he did not and I returned to Penrith bringing the Handkerchief with me this was the Saturday and on the Monday following I received a summons to attend the Court at Penrith to answer a complaint there and then be brought forward – I thought this an opportunity to send the Handkerchief to Prosecutor my house being distance 3 Miles from the court and not having an opportunity before a short distance from the Court House I saw the before mentioned Ths Bean and gave him the Handkerchief to return to Prosecutor which he did- shortly afterwards I was to my surprise arraigned at the Bar on the charge of stealing from Prosecutor the Handkerchief I had returned I was remanded the second examination W Cox, JP Alexander was on the Bench with the Police Magistrate who contended there was not sufficient evidence to commit me, I was again remanded- third examination remanded again and on the fourth same committed being further evidence than was advised at the time Capt Cox was present no Magistrate save Cpt Wright upon the Bench. Under the above circumstances, I did not think it necessary to employ an attorney.

Joseph Lubb prisoner being duly sworn states that he is assigned servant to Sir John Davis, that he borrowed a silk handkerchief from Hamilton Sir John’s Butler to go to Sydney the deposed believes the silk handkerchief produced to be the one he received from Hamilton, if it is not the same handkerchief deponent swears that produced is exactly like it- it was red and marked like the one produced and deponent has no doubt that this is the same handkerchief. Deponent on his way to Sydney last Monday, fell in with Richard Lees, the defendant, they passed the evening and slept together at Snowden’s where deponent had passed, a letter for Judge Forbes and the silk handkerchief also in his possession, in the morning when deponent rose he missed them all deponent then asked the prisoner for them, prisoner gave him the pass and then denied all knowledge of the letter and handkerchief, they proceeded on to Sydney and dept went out to Parramatta whilst Lees went into the town. Lees overtook them on the coach and then deponent again asked him for the handkerchief which Lees denied all knowledge of then again, when deponent arrived in Sydney- he went in search of Richard Lees the following morning and found him at the bottom of Brickfield Hills- Deponent asked him for the letter & Lees said he had it at ?Lawes? And whilst they were on their way there, Lees took off his hat and produced the letter and gave it to deponent, prisoner stated that he had lost the handkerchief when dept returned he told Hamilton who acquainted Sir Joshua Jamison of the facts on deponents return he met a man named Salman at Snowden’s again he told him he would bring the handkerchief up from Lees when he came up to the Nepean or else give him the value for it.

Being sworn states that this morning the 7th of June Richard Lees called to him and asked if he knew Sir Joshua Mills Wright, deponent said he did, and Lees asked him to give the handkerchief now produce to him.

Joseph Lubb re examined being sworn states that when at Snowden’s he saw the silk handkerchief with the possessions of Lees, who said he would give it to deponent when he got on the road- before this deponent had asked for the handkerchief and the prisoner denied all knowledge of it, Lees and the man named Salmon who were with them at Snowdens at the morning of deponent producing his silk handkerchief went aside to converse before they left Snowden’s deponent was coming towards them to try and get the handkerchief when Lees said if you attempt to follow me I will strike you, when deponent arrived in Sydney as detailed in his first examination Lees told him in presence of a Man named Claxton that he could not give him his silk handkerchief as he had lost it together with another of his own when drunk the night before, deponent never saw the handkerchief again until Lees got it at the Police Offices on the morning of the examination.

Robert Claxton prisoner being sworn deposed that about the week before last the end of May or beginning of June that he was in company with a man named Lubb in Sydney who told deponent that he wanted to look for a man who had a letter and handkerchief of his as deposed and Lubb was coming down the Brickfields Hills they met with some man and Lubb asked him for his letters and handkerchief- the answer the person made was that he had lost or mislaid the handkerchief and that he could not give it to him deponent does not know the person of Lees being sick at the time but the person Lubb accosted was tall and resembled the prisoner in size.

James Rew free being sworn deposed that he was at Snowden’s when a man came there with Richard Lees, they had supper and slept there in the morning when the same rose he said he had lost his silk handkerchief which was round his neck, he went to Snowden to complain of it. Snowden then asked Lees if he had taken it. Lees asked what, why this handkerchief said Snowden and said here it is, deponent learned nothing of the pass or letter being given to Lees to keep. The parties went away and deponent knows nothing farther but when Lees returned from Sydney he saw the handkerchief again in Lees possession who said he should give it to them afterwards.

James Henry Salmon so worn deposed that he was at Snowden’s as above mentioned and confirmed the statements deposed hearing nothing of a pass or letter given to Lees to keep, he heard Lees say he had Jubbs handkerchief when Lees was in Sydney and that he would give it up, on his return to Penrith.

The Trials of Richard Lees cont.