It appears that Robert Gransden’s Oil and Colour shop was more extensive than just providing paint and pigments to painters. Robert Gransden had at some stage partnered J. Snell as an Iron Founders. It seems that this partnership had not gone well and the partnership was disbanded in 1844. 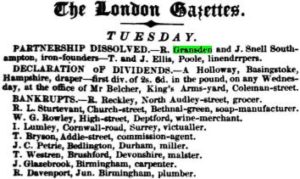 However, Robert Gransden, son of John Gransden, appears to have retained some of the equipment and practices of the iron foundry in his Colour and Paint Shop in Orchard Lane, Southampton.

In 1848 Robert Gransden appeared at court as a witness against Elijah White and Edward Bevan who were bought on charges of stealing three quarters of a hundred weight of Iron, the property of George Gould. White and Bevan had been arrested in January of 1848. White had been in the employ of Mr Gould for eight years and Bevan was Mr. Goulds apprentice. At the hearing in January both White and Bevan were committed for trial and were then admitted to bail.

Robert Gransden had been the receiver of the goods. However, despite being “occasionally severely rough handled” Robert Gransden seemed to be unable to confirm that  Bevan or White were the people who had come into his shop to sell iron.

Robert Gransdens partner had weighed out the iron and called out the amounts to Robert who was in his office in the middle of the store. Robert had paid the men as they had passed him but only saw the man’s hand as he, Robert, passed over the money.

Charles Ford, a labourer, was the man who had weighed the iron and Robert Gransden trusted him to assess the correct weight. As the scales were in the back of the shop this was out of the line of sight of Robert Gransden. Meanwhile Robert Gransden had not seen the men while he was in his office because he was busy shaving.

At the conclusion of the trial in April of 1848 both men seemed to get off relatively lightly with Elijah White sentenced to six weeks in gaol and Edward Bevan to just three weeks. 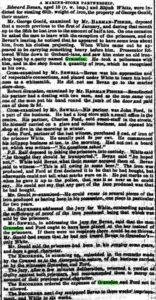