Warning for Aboriginals: this article may contain images and views of deceased people.

There are a lot of things that I would like to research and add into Edwins story to make it more readable and more relevant. So I am going to put a list of those things down here so that I remember what it is that I am trying to achieve.

Edwin first went to sea around 17-18 years of age. I know that from his Merchant Navy records but I do not have any details of these voyages. I would like to try and track down some of these voyages.

Once Edwin did go to sea I have a couple of voyages in and around Australia but he obviously did a lot more than that. So I would also like to try and learn more about where he went after he joined the Merchant Navy. In particular there is a reference to a possible marriage in Brazil, did Edwin ever go to Brazil?

There is also a marriage in England mentioned on the marriage certificate for Edwin and Maria, did this marriage ever exist, is it the one in Brazil or are both incorrect?

Was Maria linked in with Caroline Chisholm and the “five pound pom” scheme that was often used by sailors who married for the five pound dowry and then left their wives and moved onto the next one. How do I even find out records to answer this sort of question? Is it possible to find records that will help me answer this question?

Does Ellen Fly/Sly come into the family in any other way than as a friend that Edwin stayed with? His only daughter is named Ellen, so she isn’t named after her mother but her name is the same as the “friend” that Edwin was staying with when he lived in the England? Is there a connection, if so what is it?

Some information on Edward Stone Parker would really add to this story. In particular he appeared to have a positive interaction with the Aboriginal people of the area which was extremely unusual at this point in time. So I would like to include some information on him and his house in my final story. There are also photos of Edward Stone Parker available what is the copyright on them and can I use one in my story. This question is already answered and a photo added to this post already. 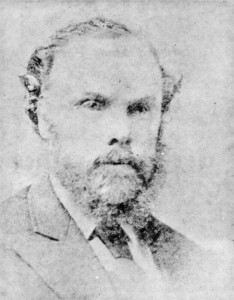 I have a photography of an aboriginal boy that belongs in my collection of family photos. Up until now there has been no indication of whether or not that photo was linked specifically to anyone in the Gransden family. This, so far is the only link I have to sustained contact with the Australian Aboriginal people. It is possible that this photo is one of the Aboriginal people that Edwin came into contact with on Edward Parkers property. What is the respectful way to deal with this photo? If at all possible I would like to have the photo on the website but I do not want to do anything that may be considered to be disrespectful to Aboriginal people and their beliefs. So I need to find out what the ethics are around something like this.

This website may also be very useful for this and has a number of references to appropriate sources. http://prov.vic.gov.au/publications/provenance/provenance2009/the-case-of-peter-mungett

This website may also be of interest and has a picture of the huts used by the Aboriginal people at Franklinford. At this stage I think I need to put a warning up on my post. So I will add that it at the top. 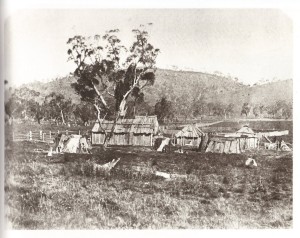 Franklinford- Aboriginal Huts from the 1850’s.
No copyright information was available for this photo. The photos comes from http://mountfranklinannualpagangathering.blogspot.com.au/2011/02/aboriginal-reserve-near-mount-franklin.html if there is a need to remove the photo, it will be done.

It is possible that Edwin had a miners license, after all he is advertising for people to go shares with him in a Puddling Machine. If so, can I get hold of a copy, or get the details.

The Shakamaxon appears to be mainly a female ship. It would be very interesting to find out more about Rebekah’s arrival and the ship that she came in on.

Was Rebekah one of the women that were hired out when they came off the Shakamaxon or did she go straight to Franklinford to live with a possible relative?

I have Edwin and Silas going from Victoria to Sydney and a notice in a newspaper saying that Edwin and Robert, the eldest brother, were last known in Bathurst. When did Edwin travel from Sydney to Rockhampton, when did Silas leave Edwin, and was Rebekah travelling with them the whole time? Also did Edwin actually travel to Bathurst before going to Rockhampton of was the wording of the location of Edwin and Robert specific only to Robert?

What was Crocodile Creek like? What events happened there? I know that while Edwin and Rebekah were there there was an uprising against the Chinese miners and that apparently the towns people were in support of the Chinese whilst the miners were not. Edwin and Rebekah were not miners and had both a house and shop in the town, so they would to some extent have been involved in this event. According to the news papers of the day it is more likely that they would have been supportive of the Chinese rather than against them. I would like to add some of this information into my story.

Can I get hold of more of the details of the land Edwin purchased. There seems to be only two sets of purchase details but possible as much as four different pieces of land. I would like to try and sort this out and get more detail.

What was the lead up to Edwin’s shop becoming the Post Office and is there any documentation. Running a Post Office had very strict requirements and most of those were documented. Was Edwin’s shop formal enough to have those documents? If so where do I get them from?

Edwin advertised in every issue of the local News Paper that he had a copy of the Goldfield Regulations. What were they and where do I get a copy? Can I get some pictures?

Edwin obviously received his license for the Reefers Arms Hotel. Is there a copy and where do I get it from? Are there any images?

What happened in the murder of Patrick Halligan and how did the Rewards Committee fair?

I think that is enough for today. Tomorrow I will have a look at what I would like to obtain for Edwin James and Ellen Gransden so that I can write up the rest of this story.