On the search for Shirley and Jefferey’s wedding I came across this lovely Gransden wedding description. This wedding is for Keith Gransden and Daphne Patricia Gransden nee Tierney. Keith Gransden confused me for a long time when I first researching the family tree. I had all of this information about a Keith Gransden but no one knew who he was. His name was Keith but the family have called him Mick for as long as they could remember.

Unfortunately, the photograph in the paper was not a very good one, and I do not have a better one of their wedding. Still, I have put the photo of Patricia Gransden nee Tierney, from the newspaper up. It is the only one that I have.

Bridesmaides, Misses Joan Tierney and Elaine Pellick recently entertained the young couple at a kitched tea in the Memoiral Hall.

Tiny Lorna Kearney, flower girl at the wedding, presented the bride-to-be with an orchid spray when she arrived at the hall.

Chariman of the party was Mr. M. Connors.

Her French lace gown mounted over satin, was set off by the ice blue tinselled net frocks of the two bridesmaids.

Mr. Doug Gransden attended his brother, who is the son of Mr. and Mrs. R. S. Gransden of Prince Street. Mr Henson was groomsman.

Visitors from Gillgandra and Dubbo were among the guests entertained in the School of Arts after the church service. 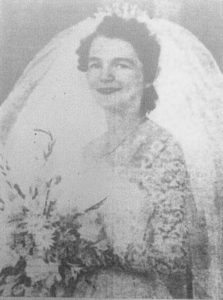