Whilst reading the account I realised that I had a photo of the wedding that was being described. It isn’t often that you do have something that links so nicely into a story in a newspaper but Weddings are likely to be the occasions when you do. So I am putting the details of the Wedding up on this page. Does the description measure up to the photo? Or the other way around? 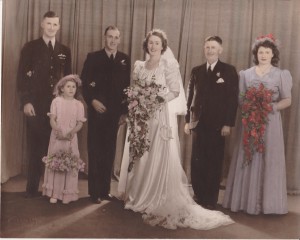 Gransden Mulligan
Of Interest to Eugowra and Orange friends was a pretty wedding solemnised at St. Matthew’s C. of E., Eugowra, last Saturday, at 1130 a.m., the contracting parties being Miss Freda Grace Mulligan and W/O. Walter Garth Gransden (R.AJLF.). 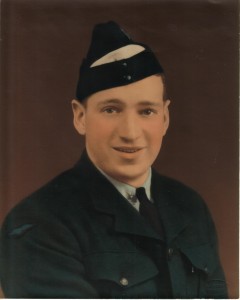 The fair, graceful bride, who Is the only child of Mr. and Mrs. F. Mulligan, of “Woodlands,” Eugowra, looked lovely In a gown of white satin, the bodice and sleeves featuring ruchings, while
the full skirt formed a train. A cuttulle veil (kindly loaned by Mrs. Hurcum) fell In cascades from a headdress of silver leaves, and to complete the picture the bride carried a beautiful bouquet of white tulips, lily-of-the-valley and lupins, tied with white satin. 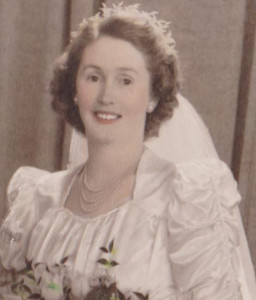 Following the bride was the dainty little flower girl, who wore a pretty dawn pink silk frock with a pink tulle veil gathered to a spray of shaded blue delphiniums. She carried an artistic basket of sweet peas and blue delphiniums, while an armlet of the same lovely flowers completed her attire. The bridegroom, eldest son of Cpl. and Mrs. R. Gransden, of Orange, was attended by F/Lt. Frank Dixon, Q.F.C. (ex-p.o.w.), who returned during the week from overseas.

After Nuptial Communion and while the register was being signed, Misses Glad and Con Herbert rendered a glorious duet, “I’ll . Walk Beside You,” Mr, Eric Hill being accompanist and also organist for the occasion.

Well-deserved credit is due to Mrs. J. Copeland (the bride’s aunt), who catered so efficiently.
Rev. Richards, who officiated at the marriage, was chairman and the usual toasts were proposed and honored. Many telegrams of congratulation were received and among the valuable wedding gifts were several cheques. During the reception the guests were charmed with a vocal solo by Miss Con Herbert, who rendered Toselli’s “Serenata.”