Between 1800-1803 a French expedition lead by Nicholas Baudin travelled along the coast of Australia with the intention of mapping the coast of “New Holland”. The expedition did not arrive in the Sydney area until 1801 just prior to the arrival of the Earl of Cornwallis. On the Earl of Cornwallis was a young convict woman named Mary Stevens, along with 193 male convicts and another 94 female convicts and some free settlers. Mary Stevens is the Convict Ancestor that I am following for my unit on Convicts at UTAS. 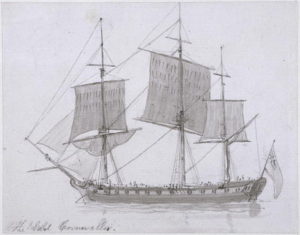 The Baudin expedition contained two ships the Geographe and Le Naturaliste, they reached Port Jackson in June 1801. François Péron was on this expedition and he kept a record of his arrival in Sydney. The sights that he saw would have been the same ones that Mary Stevens would also have seen as she arrived in Sydney aboard the Earl Cornwallis just a short while later.

Towards the middle of this magnificent port, and on its southern bank, in one of the principal creeks, rises Sydney Town, the capital of the country of Cumberland, and of all the English colonies in this part of the world; seated at the base of two hills, that are contiguous to each other and having the advantage of a rivulet, which runs completely through it; this infant town affords a view, at once agreeable and picturesque. To the right, and at the north point of Sydney Cove, you perceive the signal battery, which is built upon a rock, difficult of access; six pieces of cannon, protected by a turf entrenchment, cross their fire with that of another battery, which I shall presently mention; and thus defend, in the most effectual manner the approach to the harbour and the town. Further on, appear the large buildings that form the hospital, and which are capable of containing two or three hundred sick. Amongst these buildings, there is one particularly worthy of notice, as all the parts of it were prepared in Europe, and brought out in Commodore Phillip’s squadron; so that in a few days after its arrival, there was an hospital ready to receive such of the crews as were sick. On the same side of the town, at the sea shore, you observe a very fine magazine, to which the largest ships can come up, and discharge their cargoes. In the same direction are several private docks, in which are built brigs and cutters, of different sizes, for the purpose of trading either inland or beyond the colony. These vessels which are from fifty to three hundred tons burthen, are built entirely with the native wood; even their masts are obtained from the forests of the colony. It is at the spot called Hospital Creek, that the ships of individuals unload their cargoes. Beyond the hospital in the same line is the prison, which has several dungeons capable of holding from an hundred and fifty to two hundred prisoners; it is surrounded by a high and strong wall, and has a numerous guard on duty, both by day and night. A short distance from the prison is the storehouse, for the reception of wines, spirituous liquors, salt provisions etc. In the front of it is the armoury where the garrison is drawn up every morning; accompanied by a numerous and well composed band, belonging to the New south Wales regiment. The whole western part of this spot, is occupied by the house of the lieutenant governor general; behind which is vast garden which is worth the attention both of the philosopher and the naturalists on account of the great number of useful vegetables which are cultivated in it; and which have been procured from every part of the world by its present respectable possessor, Mr. Paterson, a distinguished traveller, and member of the Royal Society of London. Behind the house and the magazine just mentioned is the public school; here are educated in the principles or religion morals and virtue, those young females who are the hope of the rising colony; but whose parents are either too degenerate too poor to give them proper instruction. In the public school however, under respectable matrons, they are taught from their earliest years, all the duties of a good mother or a family. Behind the house of the lieutenant governor in a large magazine , are deposited all the dried pulse and corn, belonging to the state. It is a sort of public granary intended for the support of the troops and the people who receive their subsistence from the government. The barracks occupy a considerable square, and have in front several field pieces; the edifices for the accommodation of the officers, form the lateral parts or ends of the building; and the powder magazine is in the middle. Near this, in a small private house, the principal civil and military officers assemble. It is a sort of coffee house, maintained by subscription, in which there are several amusements but particularly billiards, at which any person may play, free of expense. Behind the armoury is a large square tower, which serves for an observatory to those English officers who study astronomy.