For my UTAS course on convicts I have to write a story about one of my convicts and a series of break out stories. Not all of them are assessed but some of them are. This is the break out article I wrote about the Gaol at Taunton where Mary Stevens was held before her Assize Court hearings at Lent of 1799 and 1800.

All I can say, is that I wonder how badly she suffered from Scurvey by the time she got to Sydney Cove. Being a convict on a farm even at the time that she arrived was probably preferable to the life she had lived in the gaols and on the trip to Sydney. I suspect that she also received better food on that farm then she had ever had in her entire life prior to coming to Australia.

The Lent Assizes for the County of Somerset were held at the assize hall in the Castle of Taunton. Thus there was a gaol at Taunton that was used to hold the prisoners close to the Castle so that they were convenient for their Trial at Taunton Castle. The gaol was erected in 1754, expanded in 1815 and later became part of the Police Headquarters for the town of Taunton.[1] 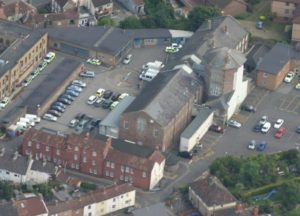 Wilton Gaol, Taunton.
http://www.rootschat.com/forum/index.php?topic=315870.0 This photograph is on a Rootschat forum. If I ever get the details from the person who took the photo I will credit them.

Whilst in the gaol at Taunton Mary would have been allowed half a quarter loaf per day and a dinner of meat once a fortnight. On this meagre allowance she would have had to survive for the duration of her time at Taunton, unless she could afford to supplement her food. If she had no way to pay for additional food then any extras she may have obtained would have been reliant on the good nature and bounty of others, possibly even her family, if they visited her.[2]

[2] Google Books. Neild, J. 1812. State of the prisons in England, Scotland and Wales …: together with some useful documents, observations, and remarks, adapted to explain and improve the condition of prisoners in general … Original from University of Minnesota. Digitised 1 Jul 2010. P. 555 https://books.google.com.au/books?id=SwEMAQAAMAAJ&pg=PR64&lpg=PR64&dq=Taunton+Castle+gaol&source=bl&ots=6ykeJlDCAa&sig=bEdW-GzP54yIG8oPGga9iMlVBQw&hl=en&sa=X&ved=0ahUKEwiaq6XWyoXNAhWIv48KHQf_AZgQ6AEIRTAJ#v=onepage&q=Taunton%20Castle%20gaol&f=false (Accessed 1st June 2016)