I spent some quality time with the members of the Bathurst Historical Society. They were very helpful when it came to looking things up for me and going through my options.

We looked up the Convict Musters for Bathurst in 1837. There is one William Russell there that may be an option. But without more details it is almost impossible to come to any conclusion. There are a bunch of Irish William Russells who came to Australia as convicts at the correct time. Whilst in many ways this would be good it is unlikely that these are the correct William Russells. William and Mary married in a Church of England not in a Catholic Church. It is possible that William changed his religion to marry Mary but it is unlikely. Thus it is probable that William was English rather than Irish.

There was one William Russell per Marquis of Hastings 30 years old in the 1837 Muster who is a possibility. The Master was Thomas Pye. This needs to be double checked as there seems to be no convict with these details in Ancestry.

Time to get more birth, marriage and death certificates to try and clear up some questions.

The witnesses for William and Marys wedding were Jno L Darney of Bathurst, Eliza James of Bathurst and William Parrott of Bathurst. Finding these people may be a way of moving forwards.

John L Darney, possibly the same person was, in conjunction with his wife, the teacher of the Kelso Church of England School. He was witness to a number of weddings including one between Bridget Broderick and Thomas Brown. This marriage was later disputed. 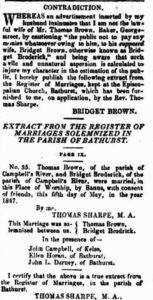 At this stage I have still not confirmed the identities of Eliza James or William Parrott.