Mary Stevens was Mary was sentenced at Ilchester Court during the Somerset Lent Circuit hearing on 28th March 1799 to “Stealing Goods val. 30/- of Thomas Andrews”. At the Lent Circuit at Taunton in 1800 her sentence was confirmed and she was transported to Australia on the Earl Cornwallis. There are very few Newspaper articles about Mary’s trial and sentence, just a one liner on the 04th of April 1799 – in the Bath Chronicle and Weekly Gazette – Bath, Somerset, England. 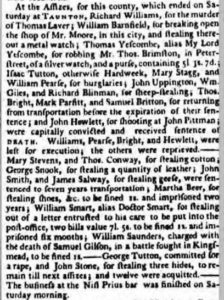 Just a couple of months after Mary Stevens was going through the ordeal of being tried at the local Ilchester Court and then being taken to the Assizes at Taunton and possibly kept at the Taunton gaol, Jane Leigh Perrott was being held at the Ilchester gaol awaiting her trial at Taunton. Unlike Mary Stevens, Jane Leigh Perrott was in many of the local and National Newspapers for months with full coverage of her trial and statements by herself and all relevant witnesses.

Jane Leigh Perrott was the aunt of Jane Austen. She came from a well off and titled family and had all of the advantages of wealth and birth that Mary Stevens did not have. Thus whereas Mary Stevens was limited to one courtyard room crowded with all the other female prisoners, with no occupation for any of the prisoners so they had little to do with their time. As a result the female ward was described as a place of dissolution and profligacy, just six years later when the gaol was being assessed and improvements organised. The Rise and Progress of the Improvements at Ilchester Gaol 1806-1821

Mary Stevens would have had an uncomfortable time in Ilchester gaol. The experience of Jane Leigh Perrott would have been very different. Much as Jane Leigh Perrott complained of her situation the realities were far less uncomfortable than those of the other female prisoners. Jane, herself was housed in a room adjoining the gaolers rooms. She gives brief descriptions of the gaol and of her situation in the gaol- “Vulgarity, Dirt, Noise from Morning till night…”

…the Man told me that the Dinning Room I was to consider as my own whenever I choose to be along- and so it was till the Fires began; but this Room joins to a Room where the Children all lie, and not Bedlam itself can be half so noisy, beside which, as not one particule [sic] of Smoke goes up the Chimney, except you leave the door or window open, I leave you to judge of the Comfort I can enjoy in such a Room. Austen Papers 1704-1856 Ed by R. A. Austen_Leigh. Ch 7

Jane Leigh Perrott was accused of stealing a card of lace worth twenty shilling from a shop in Bath. She was arrested in August of 1799 but was not able to obtain bail. Thus she stayed with the Ilchester gaoler until the Lent Assize of 1800, the same Assize that Mary Stevens had her sentence confirmed at, before being transported to New South Wales for the term of seven years.

Mary had stolen thirty shillings worth of cotton. Jane had stolen twenty shillings worth of lace. Mary quite probably did it to survive. The trial of Jane Leigh Perrott gives evidence that suggests that Jane stole because she considered the lace that she had stolen to be over priced and that she was entitled to the lace https://austenonly.com/2009/11/28/jane-austens-particular-places-easton-lincolnshire/ Mary was sent to Australia, Jane was acquitted and sent home with her friends. In later life it seems that Jane stole again, yet she was always protected by her family. Mary never had another brush with the law that has been recorded. It is probably an over simplification to put down the differences in their experiences to class, but it would certainly have some impact on the differences in their experiences.