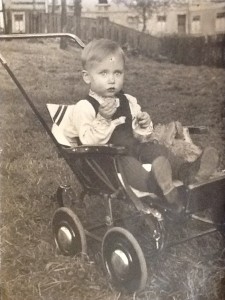 One of the Warnecke relatives passed away two weeks ago. He was in Germany and had been there for a number of years but all of his living descendants and his ex-wife still live in Australia. So we had a memorial for him this weekend to celebrate his life and the time that he was with us.

One of the things that I had done about a decade ago was ask him to write up for me some memories of his experiences in Germany as a child and then again in Australia when he arrived here just after WW2. We hear so many stories about how the English and the Australian’s saw and felt about the War but we hear so little about the German experience other than the Nazi experience and the ‘evil’. So I was really interested to see if I could get some information about those experiences from someone who had been in Nazi Germany and yet had not been part of the Hitler Youth and had not experienced the War as one of the ‘nasty’ Germans. He had in fact experienced the War as someone who survived depredations and loss and all of the negatives of War and none of the rallying cry and build up that we see in all of the movies.

Imagine my surprise then, when just before moving back to Germany in his 70’s, this relative turned up with over 100 pages of hand written notes detailing his experiences in his early life including his time in Germany as a child and teenager and his move to Australia in his early 20’s. They were his present to me before he left to go to Germany. I was unbelievably stoked that he had written so much information and was happy to give it to me.

I really appreciated the pages and devoured them straight away with the intention of transcribing them when I could. I then leant them to another family member and promptly forgot about those pages for a number of years. Just a week ago I was woken up early to a phone call letting us know that this ancestor had died unexpectedly in his sleep. All of a sudden I realised that I hadn’t seen the pages he had given me for a decade or more and that I didn’t know if we still had them. What a tragedy if they were lost.

So I contacted the person who had last had them. He still had them and had in fact seen them just a week before. Not only that, he was happy to scan them and put them up on Google Drive so that myself and other family members could transcribe them over time.

So, I have completed the first 10 pages of 106. Eventually I think they will need some editing and some additional information but it is possible that they may make a good book. In the mean time I am just so relieved to have the pages made available to the whole family again.

This post is done without tagging the individual and without giving a name, other than a surname. The death of this person is too recent and too raw for more details to be added at this stage. Eventually this person will be another story on this website and I hope that people enjoy his story as much as they enjoy other stories. In the mean time the work of transcribing his work and life in his hand, is ongoing. I look forward to what the finish will bring.